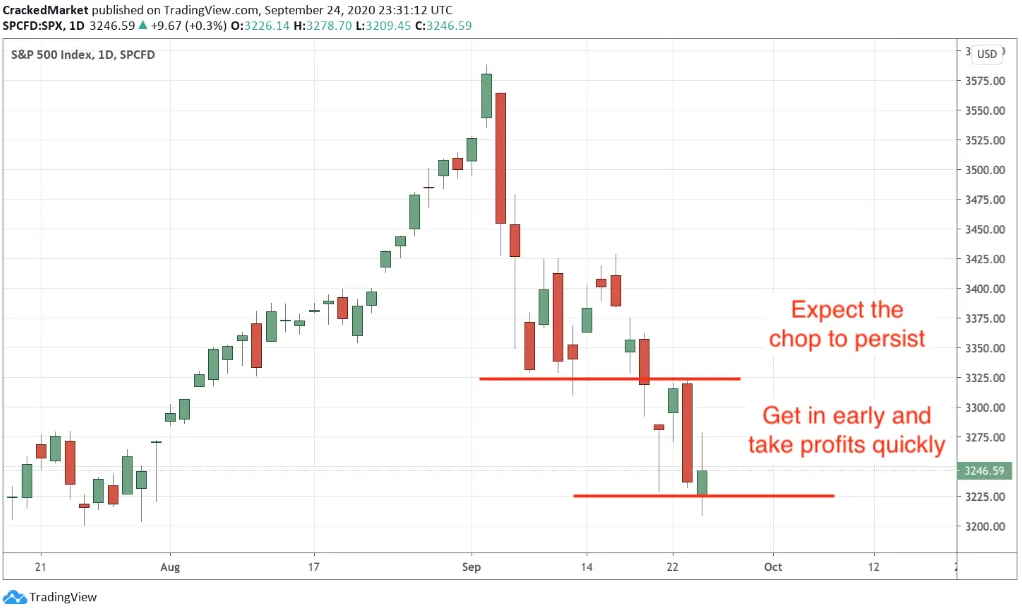 It was another tumultuous session for the S&P 500. The index opened in the red, but not to be deterred, dip-buyers came rushing in and prices recovered nearly half of Wednesday’s tumble. Unfortunately, the buyers couldn’t sustain that momentum and the index slumped back near breakeven by the close.

Under different circumstances, I would have been encouraged by the market’s early refusal to breakdown. But Wednesday’s dreadful reversal forces me to take a more critical view.

Previously, I was giving the bounce the benefit of doubt because every dip this summer bounced within days. Anyone who’s been doing this for a while knows a trend is far more likely to continue than reverse. I was even willing to accept Monday’s tumble under 3,300 support because the market finished well above the intraday lows. (How a day finishes is always far more important than how it starts.)

And then there was Wednesday. The day started well enough but those first few minutes were as good as it got and it was all downhill from there. Oversold markets bounce decisively, they don’t tumble in oneway selloffs. Meaning, this market isn’t oversold yet.

The morning’s bounce was a valiant effort but ultimately doomed to fail. There are still far too many nervous owners praying for a bounce and the supply of sellers is still too deep.

As I wrote yesterday:

I often say we cannot read too much into a single day’s price action. And that’s still true. But I am no longer giving this market the benefit of doubt. [Wednesday’s] dreadful price-action turned this into a show-me trade. Until we recover Wednesday’s highs, I will remain leery of this base. And if we fall under Monday’s lows, look out below.

Nothing happened on Thursday that changed my mind. This continues to be a show-me trade. Until the index gets back above 3,320, I will continue to treat any bounce with suspicion.

That doesn’t mean stocks are standing on the edge of a cliff and we will find ourselves down 20% percent next week. What we are seeing is a normal and healthy part of the basing process. I was originally looking for a quick bounce because that’s how the market has been acting all summer. But this time it looks like it will take longer to process recent gains.

If this market was a coiled spring and ready to pop, it would have happened by now. That tells me we should expect the choppy trade to continue. That means more fizzled bounces and failed breakdowns.

The best way to trade choppy markets is to always be prepared for the reversal. Get in early and take profits quickly. Anyone waiting for a bigger move in either direction will soon watch a nice profit turn into a big loser a few hours later.

If a person doesn’t have the time or risk tolerance to trade around this chop, there is nothing wrong with sitting this one out. Better trades are coming, we just need to be patient and wait for them. (That said, I would be leery of any slip under 3,200. We could still see another stumble or two before we find the real bottom. Remember, it is always better to be out of the market wishing you were in than in the market wishing you were out.)

Navigating Through The Markets Choppy Waters

Tesla Stock: How Much Lower Will It Go In Latest Sell-Off?