The current steep sell-off in Tesla (NASDAQ:TSLA) shares is not surprising. Those who follow the electric car-maker have seen the boom-and-bust cycles many times during the past two years.

In the latest downside move, Tesla has shed almost a quarter of its value since reaching a record high on Aug. 31. Even with the correction of that magnitude, the stock is still up 356% for the year, making it the biggest gainer among the large-cap technology companies. 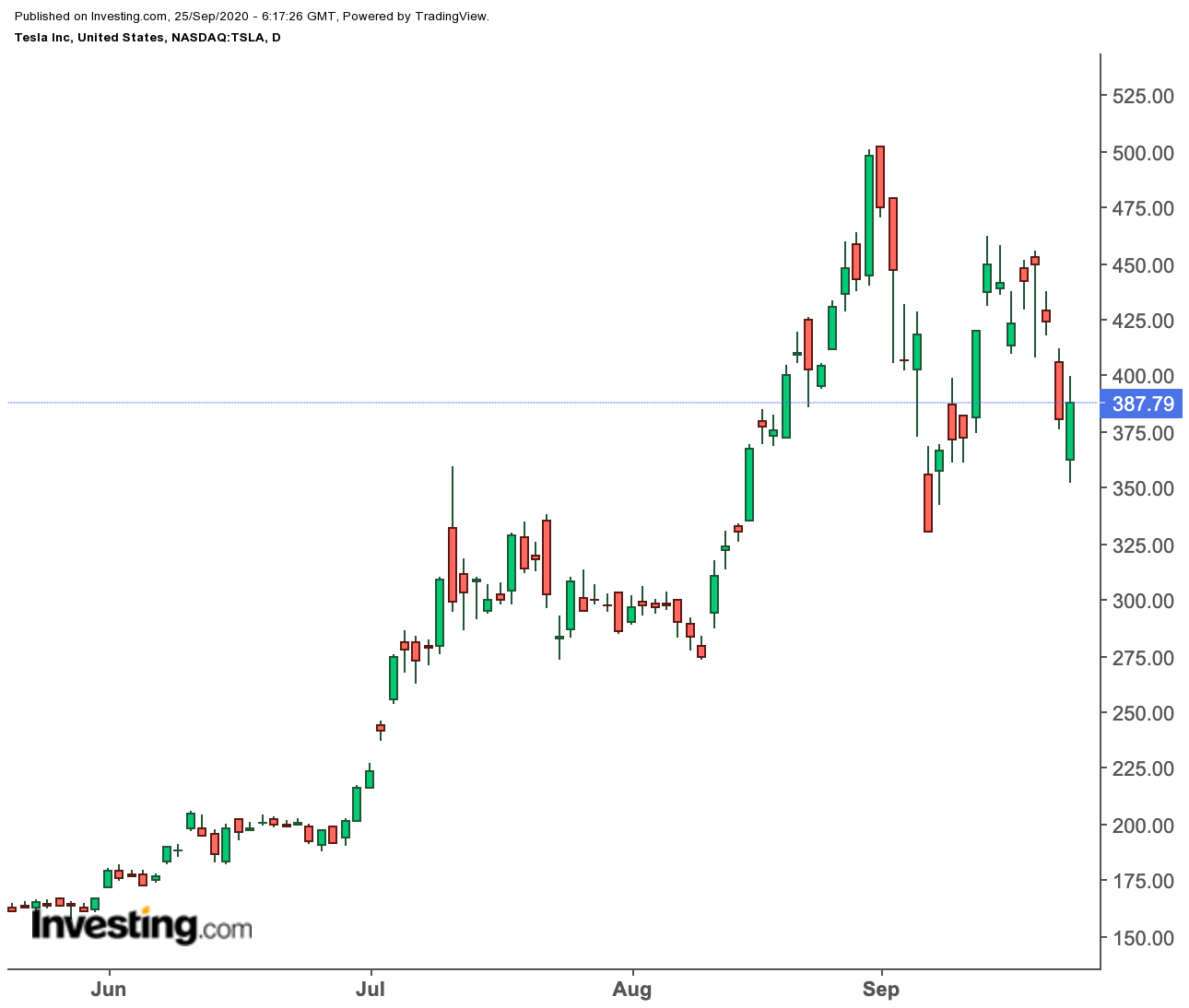 But the reality of investing in Tesla stock is that it can fall as quickly as it goes up. That trend is quite obvious in the current downturn as it is underperforming other tech names.

Behind this massive momentum are the company’s grandiose goals that help fuel share gains, but rarely get delivered. The latest example of this pattern is the recently concluded “Battery Day,” which fell short of investors’ expectations, triggering an approximate 11% slide in the stock value on Tuesday.

Founder and CEO Elon Musk told investors at the much-awaited event near the company’s assembly plant in Fremont, Calif., that he was aiming to produce 20 million vehicles annually, or almost twice as many as Volkswagen AG (OTC:VWAGY) sold last year.

With this ambitious production figure, that came without a precise timeline or budget, Musk also told the audience that he plans to build a $25,000 electric car and cut battery costs in half over the next three years.

According to a report in the Wall Street Journal:

“It is the kind of shoot-for-the moon goal that has previously excited investors to make Tesla the world’s most-valuable car company despite selling just 367,500 vehicles last year.”

“Mr. Musk has a long history of making grandiose claims, some of which have been conveniently forgotten, including promises around robot vehicles and missed production goals.”

The negative surprise from Battery Day comes at a time when investors are shunning the high-flying growth stocks after the post-pandemic rally that sent the tech-heavy NASDAQ to new highs and raised fear of a bubble that could burst.

“With the Battery Day in the rearview, we think there is a lack of upcoming catalysts and are cautious about demand given the recessionary environment,” wrote Robert W. Baird’s Ben Kallo in a note cited by Bloomberg, naming Tesla a bearish “fresh pick.”

Before the latest blow, Musk gained credibility after opening a giga-factory in China in record time and posting four consecutive quarters of profit after several years of struggle as he worked to deliver the Model 3.

But some analysts think these achievements are already factored into the stock valuations. JP Morgan, which has an “Underweight” rating on the stock with the price target of $65 a share, said in a note that like other Tesla investor days, Battery Day was not without its share of lofty goals and grandiose projections.

“Overall, we felt ‘Battery Day’ was effective in reinforcing confidence in Tesla’s ability to continue to lead in terms of battery cost and performance, although we still see the shares as substantially overvalued relative to the fundamentals.”

These cautionary notes remind us that Tesla’s journey to its current level hasn’t been a straight line higher. Since 2018, there have been two waves of selling, each of which pummelled investors, as the stock fell by about 50% every time. Investors should brace themselves for a similar move if the current downward continues.

S&P: Is It Time To Give Up On The Bounce?