Shares of beaten-down aviation giant Boeing (NYSE:BA) have recently been showing some signs of life.

During the past three trading sessions, the stock has jumped about 8%, adding to the 66% gain since the March dip. Shares closed Monday at $166.08, up more than 6.4% from the previous close. Despite this acceleration, the stock is still lower by more than 55% this year. 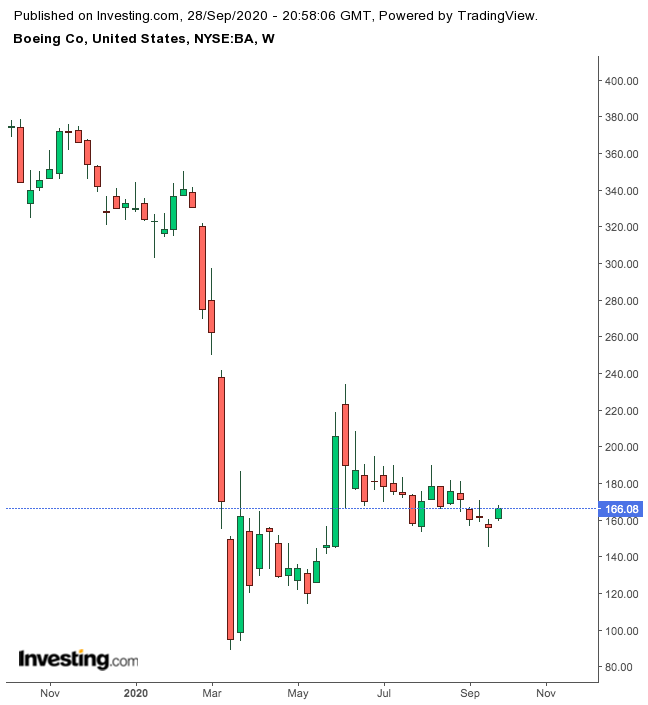 The most important question for long-term investors given this short-term rebound is whether the worst is over for this Chicago-based airplane and space vehicle manufacturer? If so, would this be the right time to start a position in the world’s second-largest aircraft maker, even if it continues facing a myriad of issues?

The latest news flow suggests that Boeing is moving closer to getting the final approval needed to get its best-selling 737 MAX back in service. The plane was grounded around the globe in March last year after two fatal accidents involving malfunctions in its automated safety system, killing 346 people.

The U.S. Federal Aviation Administration and the other three leading aviation regulators elsewhere in the world last week completed assessments of new pilot-training requirements for the MAX. This week, the FAA chief plans to test-fly the plane after it was updated with a variety of fixes the agency proposed, Bloomberg reported, citing a notification sent to Congress.

Encouraged by these developments, Goldman Sachs added Boeing to its ”Conviction Buy” list, with the investment firm listing a number of potential catalysts.

“Boeing shares are off the lows but have underperformed (S&P, XLI and A & D [aerospace and defense]) in recent weeks, despite the market starting to rotate into other value stocks, as economic reopenings occur,” the investment bank said.

“From here, further positive second derivative [effects] in air travel and the aircraft order book, plus positive developments on the 737 MAX, can act as near-term positive catalysts. Both of those have the potential to see more meaningful progress in the next few months compared to the last few months.”

Despite these positive developments on the MAX revival, the biggest risk remains the raging pandemic, which continues to hobble the resumption of normal air travel.

A scenario in which the world fails to find a cure or treatment for the deadly coronavirus soon could force many airlines into bankruptcy, causing them to default on any commitment to purchase Boeing aircraft. Convincing travellers that it’s safe to fly could take five years, according to the International Air Transport Association.

Boeing has been hard-hit by the collapse in air travel, with a net minus-615 orders for its grounded 737 MAX jet this year as a result of cancellations. The company is more focused on wide-body models used on international routes, a segment that’s expected to take even longer to recover.

Chief Executive Officer Dave Calhoun and Chief Financial Officer Greg Smith warned in July that the company faced a shrinking market that’s likely to remain depressed for years. The company could see a staggering $23.3-billion cash outflow this year, according to an estimate by Melius Research analyst Carter Copeland, before the resumption of MAX deliveries starts to fill the company’s coffers in 2021.

Even if the MAX jetliner gets all the approvals needed to fly again, its contribution to Boeing’s cash flow is very much dependent upon the airline industry’s ability to resume normal operations after the pandemic. The if and when remains very much an open question right now.

Indeed, Boeing’s stock has burned many investors during the past year, after it appeared that the company was back on the road to recovery–only to be hit by additional negative surprises.

As such, analysts on the Street are divided about the future of the aviation giant. Of 25 analysts covering the stock, 14 have given it a buy rating, while 11 are recommending to sell. The average 12-month price target for Boeing shares is around $176.

Boeing stock’s strength in recent sessions reflects the potential resumption of MAX flights, signs of air traffic recovery and the company’s access to liquidity. Given these positive developments, investors who have a long-term investment horizon, could consider taking a position in this stock.

But any meaningful gain could come in the next three to five years. As such, patience is the key in this trade.

Number of people on German short-time work scheme has dropped to 3.7 million: Ifo