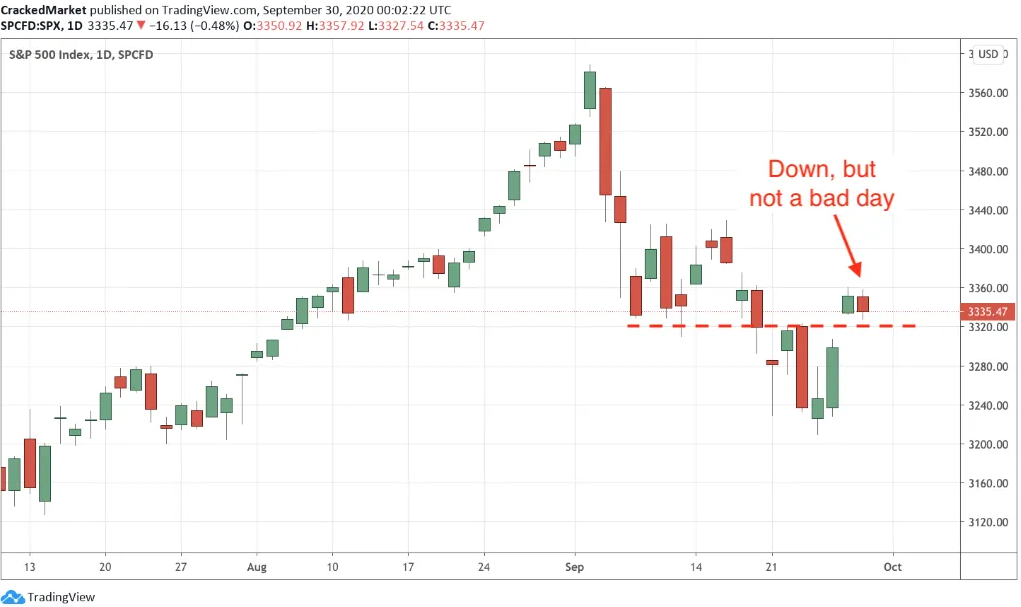 It was a very mediocre day for the S&P 500 yesterday, with prices slipping 0.5%. That said, 0.5% isn’t a big deal given the elevated volatility we’ve been living under since the beginning of September. Considering the widespread nervousness, “only” falling 0.5% could even be called a good day.

That said, we need to see a few more resilient days like this to feel more comfortable about the floor under our feet. Overbought markets tumble quickly. If we are still at these levels by Friday, we can start to put a little more faith in these prices.

The big bogie between yesterday and Friday was last night’s presidential debate. How will this affect the market? The simplest answer is, it won’t. There are a couple of reasons why.

Let’s start with the fact this is a very polarized election. Most peoples’ minds are already made up and nothing that happened last night will change who they vote for. Crash or soar, it won’t really make a difference for Biden or Trump. The people that loved them today will love them tomorrow and those that hated them yesterday will still hate them tomorrow.

And finally, the market doesn’t really care about these intermediate points. A good or bad debate by one or the other won’t create a lasting impact on the market because the market doesn’t care about debate performances, only who wins in November. As I already stated, very little happened last night to change the course of the election and it won’t affect the market in a meaningful way later today.

That said, maybe we get a knee-jerk Wednesday morning. But expect that early move to fizzle and be forgotten by the afternoon. Unless someone commited the unforgivable gaffe of all gaffes, ignore the debate. Expect investors to go back to obsessing over their fear of heights a few hours after today’s the open.

Do The Debates Matter To The Market?

Alibaba Expects First Profit From its Cloud Arm This Year

Trump deflects debate question about whether he condemns white supremacists