In its bid to take over the world, Amazon (NASDAQ:AMZN) has added podcasts to its menu of offerings, putting the tech behemoth in direct competition with Spotify (NYSE:SPOT).

Spotify shares dipped only slightly when the news was released a couple of weeks ago, in mid-September, but have spent the entire month of September in pullback mode.

I’m here to tell you that this pullback is a golden opportunity to get into Spotify because Amazon doesn’t pose much of a threat to Spotify’s impressive growth rates.

Why Am I So Confident? 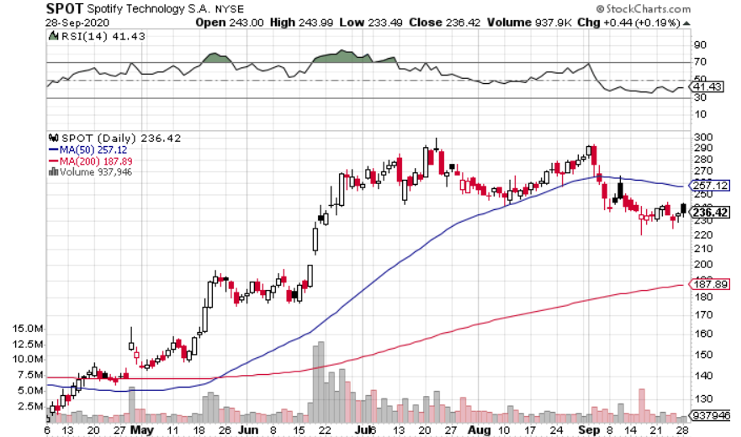 Because we’ve seen a similar script play out before with Amazon Prime Video and Netflix (NASDAQ:NFLX). Even though Prime Video has made inroads in the video streaming world, it remains far behind Netflix. It’s an instructive comparison as Spotify shares key similarities with Netflix.

By far the biggest reason why Netflix is ahead of Amazon in the streaming wars is content. Yes, most say the user experience is better, but if Amazon’s content was better than Netflix’s, watch how quickly people would ditch the latter for the former.

Netflix has sunk a lot of money into original and syndicated TV shows and movies, and the investment has paid off.

Beating Spotify on podcast content would be a tall order, even for Amazon. Consider that:

And even if Amazon does get some Spotify users onto its service, or it taps into some of the same growth markets as Spotify for new users…

This Isn’t A Zero-Sum Game

Let’s go back to the Amazon/Netflix comparison:

Prime has over 100 million subscribers in the U.S. Netflix has over 70 million. The U.S. population is around 330 million.

Why am I telling you all of this?

This Isn’t An Either/Or Proposition

With Amazon offering so much more than video and podcast streaming, users can easily justify subscriptions for both Amazon and Netflix–or Amazon and Spotify. On top of that, these subscriptions don’t cost much; most of them come out to around $10 a month give or take.

Spotify Should Remain The Leader

Will Amazon peel off a sizeable number of people that would have otherwise become paid subscribers for Spotify?

Certainly. Amazon is a very competent company with deep pockets and a propensity for sacrificing short-term gains for long-term growth.

But I don’t think it will be enough to have a substantial impact on Spotify’s revenue growth.

What should be even more clear after the release of this news, however, is that Spotify may have to pony up even bigger piles of money for the best podcast talent moving forward.

But that shouldn’t come as much of a surprise to Spotify investors. This space was bound to attract increasing competition and it’s far from a shocker that Amazon, of all companies, would enter a new streaming medium.

So Spotify’s content will continue to get more expensive. But it’s revenue/user growth outlook remains excellent and that’s what Spotify investors should be focusing on.

Wall Street Is Back In Love With Cruise Stocks