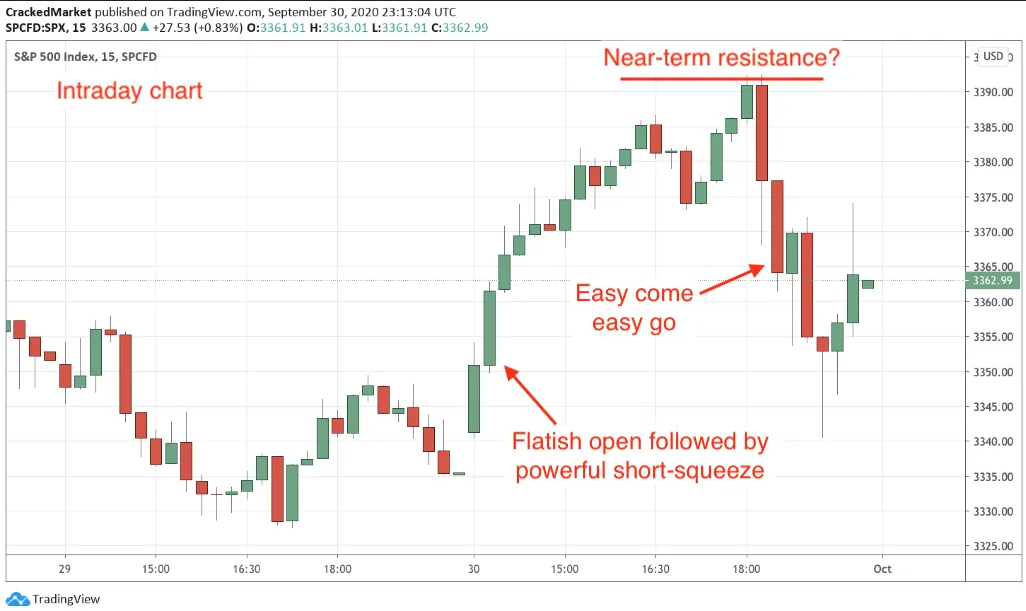 It was an incredibly choppy 24-hours for the S&P 500 yesterday.

It started with Tuesday night’s train-wreck of a debate. Stock futures swung wildly between 1% gains and 1% losses depending on who was saying what, but by the time the market opened this morning, prices returned to mostly unchanged.

So much for all the headline hype, but that’s not a surprise. Tuesday night I told readers to ignore the noise coming from the debate because no matter what happened, it wouldn’t change anyone’s mind. And yesterday morning, the market agreed with me.

That said, things got spicy after the open. Moments after it looked like it could be another ho-hum day, bulls took control and started squeezing the bears for the third time in a week. That one-way panic buying sent the index 50-points higher in just a few hours.

Short-squeezes exhaust the supply of desperate bears very quickly. Combine that midday exhaustion with the Fed extending restrictions on big banks because of potential liquidy concerns and the stage was set for an afternoon retreat back to breakeven. Easy come easy go.

But this also isn’t a surprise. Last week I warned readers to expect extreme volatility in both directions for a while. Big moves in one direction are followed by big moves in the other direction.

If a person wants to trade this chop, make sure you get in early and take profits often. Missing entries and exits by a few hours is the difference between nice profits and humbling losses.

Every morning set tripwires in both directions that will trigger automatic purchases or sales. The thing about extreme volatility is it leads to strong intraday moves that are easy to profit from if we have the courage to jump aboard. Leave your bias at the door and be ready to ride this in whatever direction it wants to go.

And if that sounds like too much work or stress, don’t sweat it. There is nothing wrong with waiting for more sane trade to return. Often the best trade is waiting for the next trade.

How To Trade This Chop

It's Time To Get Greedy In The Energy Sector, Part Deux