When August ended, stocks looked poised to move higher. The Federal Reserve had promised to keep interest rates at record low levels, effectively telling investors and anyone else who would listen, “Go for it.”

Jobless numbers were looking better too. U.S. President Donald Trump even said the COVID-19 pandemic was over.

The third quarter ended with solid gains for the major Wall Street averages: +8.5% for the S&P 500 Index, +7.6% for the Dow Jones industrials and +11% for the NASDAQ Composite. In normal times, these would be stellar performances.

Except, of course, we’re not living in normal times. That powerful rebound off the March lows created huge second-quarter gains.

For the month, market performance in September proved trickier. It started with two days of big rallies. 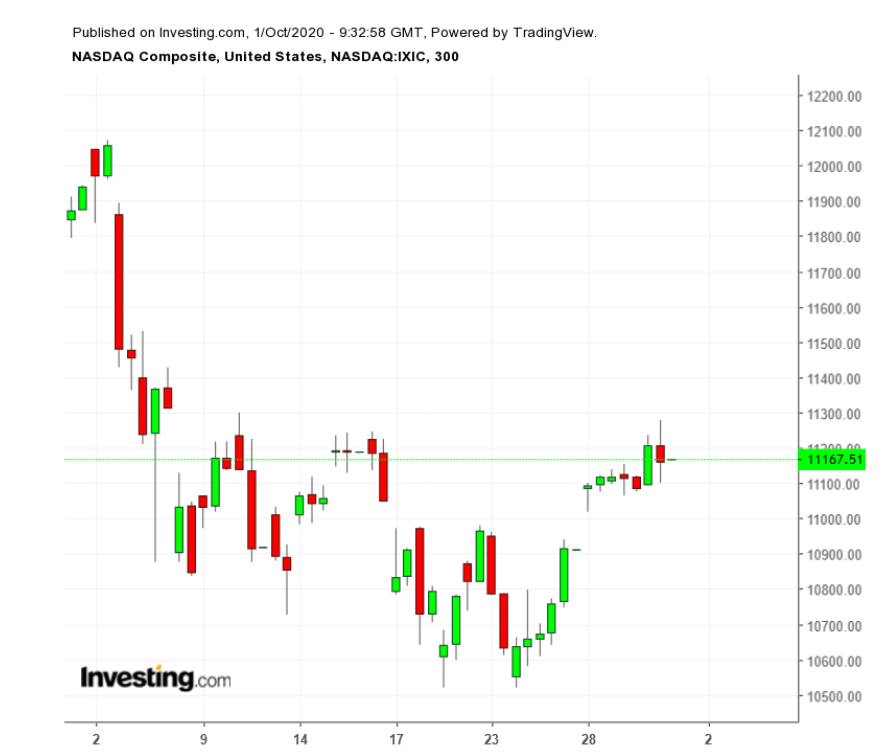 But then stocks ran into an uncomfortable reality. Share prices had jumped so quickly in August they’d become pricey, and many investors decided to take their profits and move to the sidelines.

So, the major averages suffered their first monthly losses since March. The S&P 500 fell 3.9%, the Dow slipped 2.3%. The NASDAQ fell 5.2% with the NASDAQ 100 falling 5.7%. These were not the worst losses ever; the March declines were two-to-six times larger.

What’s ahead may well depend if gains on Friday, Monday and Wednesday prove to be the start of a new uptrend.

Nevertheless, any uptrend will occur in a nervous environment. Optimism that propelled stocks this summer and started again around Sept. 23, will battle the tensions surrounding the U.S. elections. And who knows how that situation will resolve itself, especially given Tuesday’s unprecedented debate between former Vice President Joe Biden and President Donald Trump.

The COVID-19 pandemic is also continuing to cause problems. The number of new cases in Europe is growing. And breakouts in the United States still haven’t stabilized–nor necessarily flattened nationally.

Earlier this week, Disney (NYSE:DIS) announced it would lay off 28,000 workers at its theme parks because the COVID-19 virus has slammed attendance. Airlines may lay off tens of thousands on Thursday because travel has collapsed, and there’s no new federal aid expected.

Restaurants, hotels and related businesses continue struggling, although many communities across the country have opened up their economies. A big unknown is whether workers will actually return to their offices. If they don’t come back, and the work-from-home option becomes more the standard, look for a lot of distress selling in commercial real estate.

But some areas of the economy are recovering relatively quickly. As well, hopes that a vaccine against the coronavirus will be available, maybe even this year, but more likely in 2021, are stoking investor bullishness.

JPMorgan predicted this week that the S&P 500 could rise 12% or so over the next 12 months as something resembling normal life remerges.

Demand for Internet services is huge. Zoom Video Communications (NASDAQ:ZM), which developed the video technology that’s let the world communicate face-to-face without fear of spreading the virus, led the NASDAQ 100 with a 44% gain for the month. 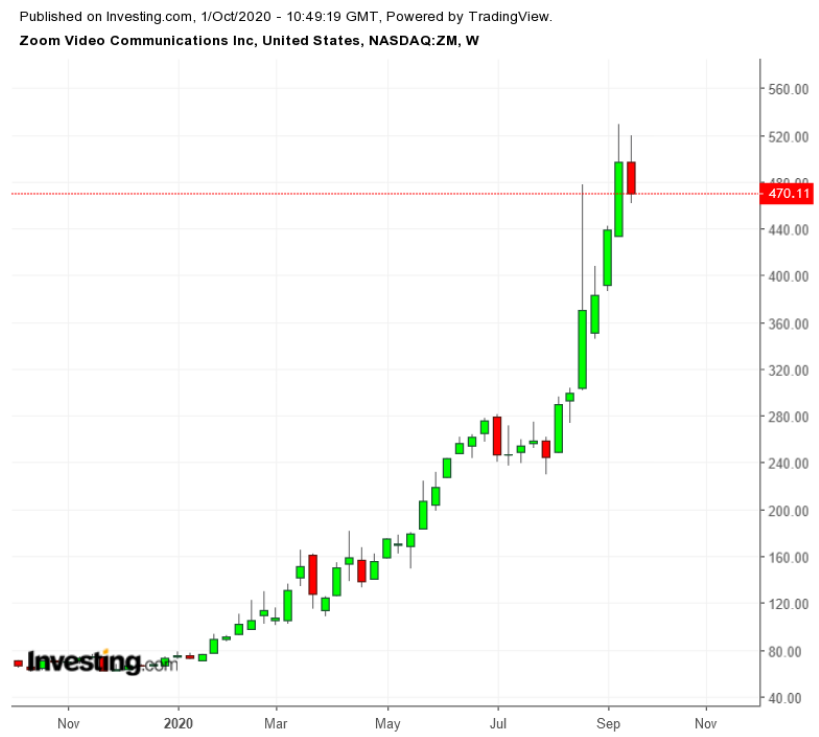 Housing activity is also strong, amid surging demand for residential space, especially in the suburbs, boosted by the Fed’s promise to continue ultra-low interest rates probably for the next few years.

Shares of homebuilder Lennar (NYSE:LEN) hit a new high for a second straight day as did appliance maker Whirlpool (NYSE:WHR), whose business is closely tied to housing.

Initial public offering (IPO) activity in all forms has soared. Upwards of 145 companies which priced IPOs, along with a host of special purpose acquisition companies (SPACs) to buy companies in order to bring them to markets, have burgeoned.

Big August Rally Proved Too Big For Some

But if things look rosy, why was September filled with so much whipsawing? The market ran into technical resistance.

Stock prices, especially those of the glamour tech megacap companies, got way ahead of themselves in July and, especially, in August, when stocks had their best month in at least 20 years. The gains were so big, analysts started to talk about a bubble that was near breaking.

Relative strength indexes pushed above 80 by Sept. 2 for the major averages. An RSI is a momentum measure, and a reading above 75 suggests a pullback is close. Above 80 means the pullback will happen in a matter of days. The break started the following day. 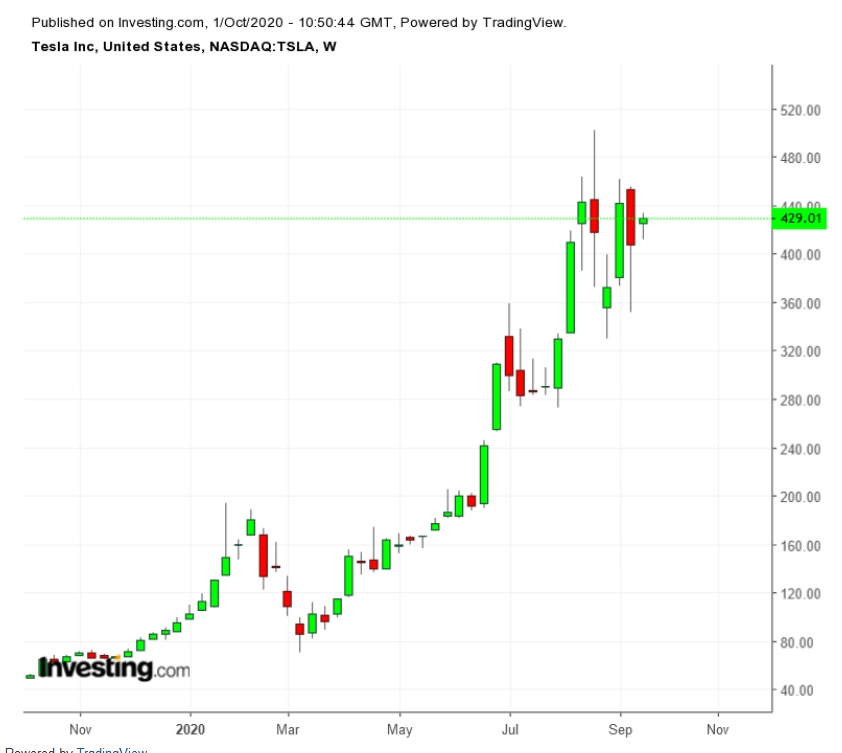 Microsoft (NASDAQ:MSFT) and Amazon.com (NASDAQ:AMZN) have the next biggest market caps currently–$1.59 trillion and $1.58 trillion, respectively. Google (NASDAQ:GOOGL) is fourth at $998 billion.

Sportswear apparel maker Nike (NYSE:NKE) was the top Dow performer, up 12.8% for the month, competing with Apple and Salesforce.com (NYSE:CRM) for the quarter.

It’s worth noting that package delivery giants FedEx (NYSE:FDX) and United Parcel Service (NYSE:UPS) were among the top performers among components listed on the Dow Jones Transportation Index (DJT) as consumers increasingly shopped online. FedEx was higher by 79.4%, with UPS up 49.9% for the quarter and 66% and 42%, respectively, for the year.

The big drag in the transportation average, obviously, is airlines, which have seen little recovery in passenger counts. Airlines are mothballing planes or cancelling orders for new planes.

For much of the first half of the year, as the pandemic spread around the globe, the dollar was the safe haven of choice. The U.S. Dollar Index rose 8.6% at its first-quarter peak, then fell 11% between March 23 and Sept. 1 before stabilizing. It started to rise again as investors worried about stocks and put their cash into bonds.

Gold jumped 10.3% in August and ended the quarter +5.3%. Silver sold off in the latter part of September as investors seemed to embrace the Fed’s new era of lower rates.

WTI crude, traded in New York, fell nearly 5.6% during the month, as worries about global oil demand weighed on the markets. Brent crude, which traders outside the U.S. follow more closely, fell 7.3% in the month. For the year, both are down more than a third because of the impact of the pandemic on oil demand.

This recent price crash has devastated domestic oil shares, with energy the weakest performer in the S&P 500 index all year, down about 16% for the month, 21% for the quarter and 50.1%. 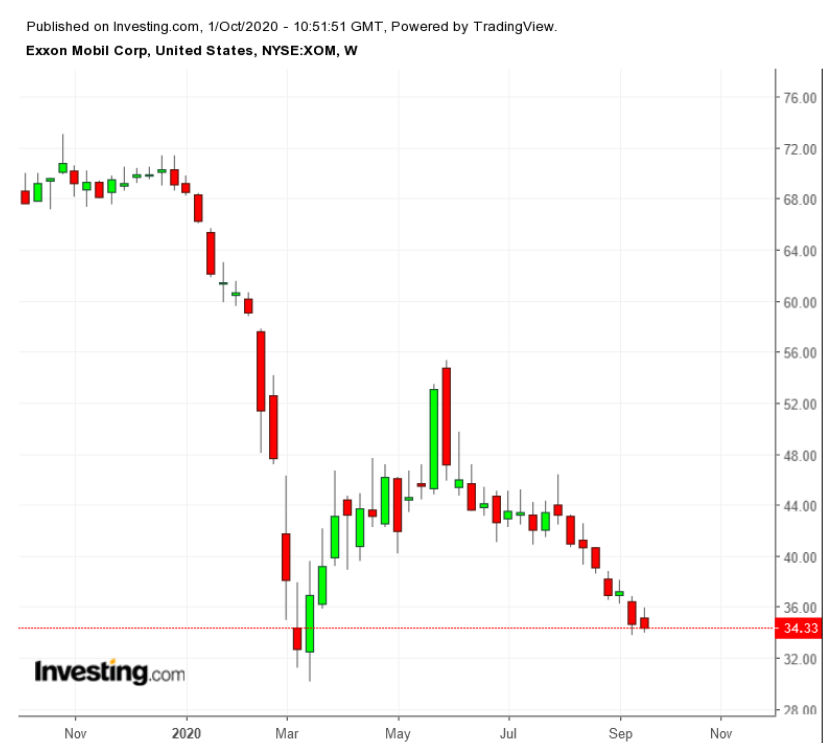 Finally, a quick look at some of the companies working on coronavirus vaccines. Those getting the most attention are:

The details about how the vaccine will be manufactured and distributed remain hazy at this point. But those who successfully execute could see significant gains in their respective stocks. The vaccines may prove profitable for the smaller companies, but keep in mind that biotech stocks are often wildly volatile.

All of these stocks have been fluctuating significantly, driven by headlines and investor hopes…and disappointments. That this is occurring is as much a signal that it’s just not clear yet how many of these vaccines will win regulatory approval.

But any announcements will likely generate a lot of interest from investors.