The Walt Disney Company (NYSE:DIS) is in the news for all the wrong reasons these days. Its business, which thrives on shared group experiences, is suffering after the global spread of COVID-19 forced the closure of its theme parks, resorts, movie theaters and cruises around the world.

The company, based in Burbank, California, announced this week that it will lay off 28,000 employees at its U.S. theme parks, which include Walt Disney World and Disneyland. Disney’s California locations remain closed because of state restrictions, while the Florida parks have been operating with limited capacity and weaker attendance than Disney anticipated.

“As heartbreaking as it is to take this action, this is the only feasible option we have in light of the prolonged impact of COVID-19 on our business,” Josh D’Amaro, chairman of the parks division, said in a memo to workers.

The House of Mouse posted its first quarterly loss since 2001 in August, reaching $5 billion, compared with a profit of $1.43 billion in the year-earlier period. Total revenue fell 42% to $11.8 billion. The company’s prior quarterly loss, amounting to $567 million, came in early 2001, according to FactSet data.

Despite this extremely grim picture, Disney’s stock is holding up quite well. After plunging 40% during the March crash, it’s up more than 50% since then. It closed yesterday at $123.31, off 16% for the year. 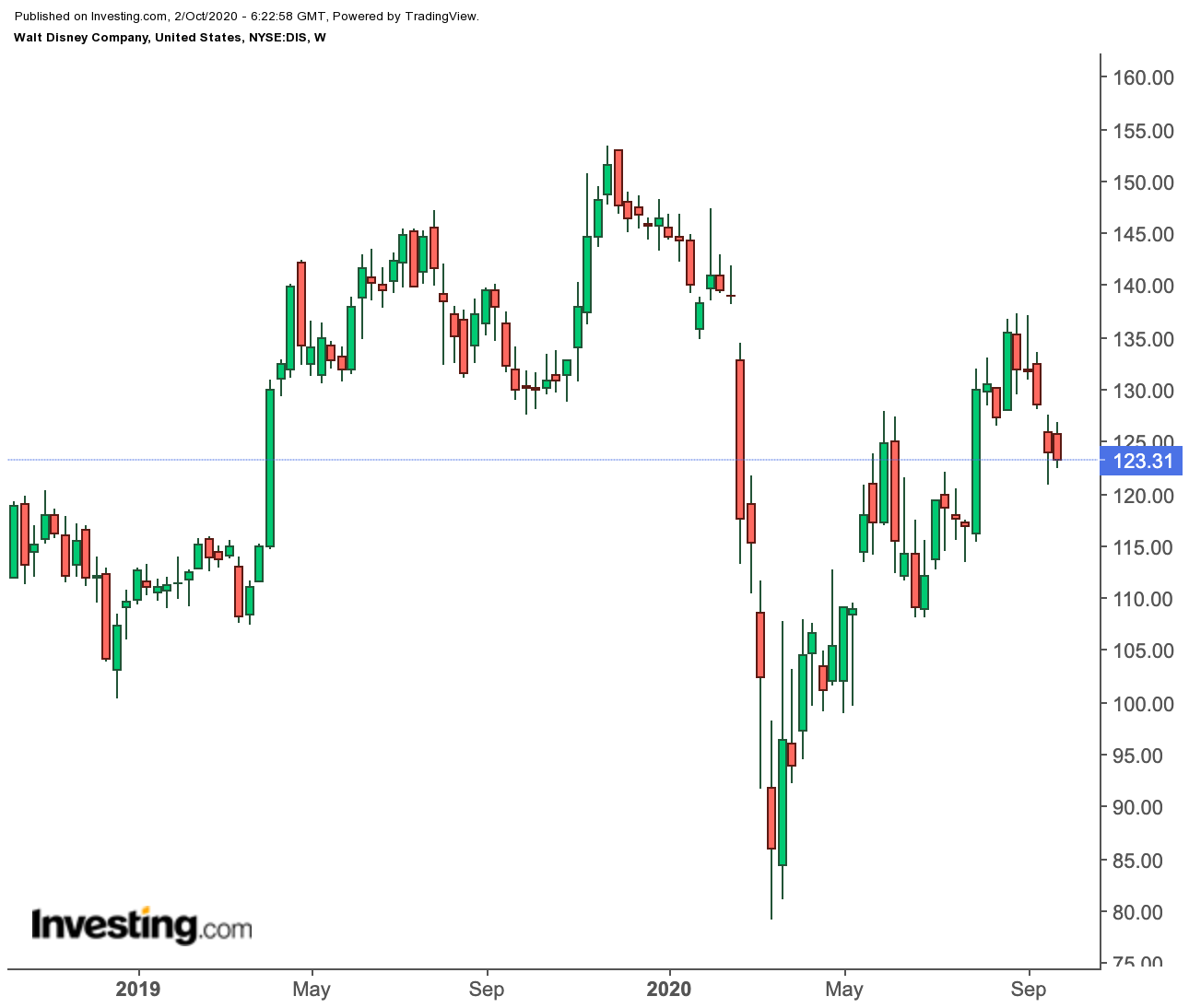 One bright spot in this otherwise gloomy outlook: the company’s newly-launched Disney+ video streaming service. Boosted by stay-at-home orders, the service is expanding quickly. It has grabbed more than 60 million subscribers since its launch in November, a mark that Netflix (NASDAQ:NFLX) took about eight years to achieve.

On Disney+, Disney released the movie version of Hamilton over a year earlier than planned and last month added Mulan at a premium price of about $30.

“Disney is succeeding in the land-grab phase of direct-to-consumer, and has the most clear path to successfully transitioning its general entertainment programming and content production businesses into a globally scaled, vertically integrated streaming entertainment leader,”

“Scaling direct-to-consumer in this land-grab phase of the industry is key to success for Disney because it will drive significant opportunities to monetize a large subscriber base in a more meaningful way down the road,”

According to a recent note by Goldman Sachs, investors are undervaluing the strength of the Disney+ service, which is expected to reach 150 million subscribers by 2025.

With these optimistic forecasts, however, there are also a large number of analysts who fear that the pandemic could permanently damage Disney, and if theme parks and movie theaters don’t rebound, Disney could emerge as a different company.

Among the 30 analysts covering the stock, 15 give it a buy rating; there are three sell recommendations and 12 are advising holding the stock. The average price target for the next 12 months is around $135 a share.

Since Disney owns some of the most iconic media and entertainment assets in its sector, chances are good that it will recover quickly once the pandemic is contained. That optimism is already reflected in the stock, which doesn’t offer an attractive entry point. Investors with three- to five-year investment horizons should wait on the sidelines to get better value on this trade.

Exxon May Lead Energy Stocks To A Massive Rebound