This year has been very tough for income investors. While growth stocks quickly recovered from the pandemic-induced plunge in March, income portfolios struggled as many top dividend payers either slashed or suspended their payouts to preserve cash.

U.S. companies in the midst of the coronavirus pandemic unveiled their steepest dividend cuts in the second-quarter since 2009, according to a Wall Street Journal analysis.

Shareholders were notified of a net $42.5-billion reduction in dividends on common stock in the second quarter, according to S&P Dow Jones Indices, excluding companies with market values of less than $25 million. The notable names among this long list include Disney (NYSE:DIS), American Airlines (NASDAQ:AAL) and aerospace giant Boeing (NYSE:BA).

Despite this gloomy picture, there are still worthwhile opportunities for long-term income investors whose aim is to earn regular cash distribution without risking their capital. One area to explore are companies north of the U.S. border where some of the top dividend stocks are trading at very attractive levels.

Here, are two of my favorite picks:

Canadian banks are very different from their American counterparts. They operate in a kind of oligopoly with very limited foreign competition. This lack of outside challenge has allowed these lenders to not only maintain their market share but also retain some very robust profit margins.

While this isn’t good for consumers who have little choice but to accept exceptionally high banking and investment fees, these lenders have been a great place for investors, especially when compared to their American peers.

If you want to earn an exceptionally high dividend yield from one of these lenders, the Toronto-based Bank of Nova Scotia (NYSE:BNS), (TSX:BNS) is one option. No doubt Scotiabank is facing a tough time just like other lenders, as the COVID-19 triggered recession hurts its margins and forces it to set aside more funds for expected loan losses, but the company’s $0.68-a-share quarterly dividend is safe, in our view.

One of the major factors of this strength is that BNS is well-funded with a capital strength well above regulatory requirements, and it’s still making a profit. 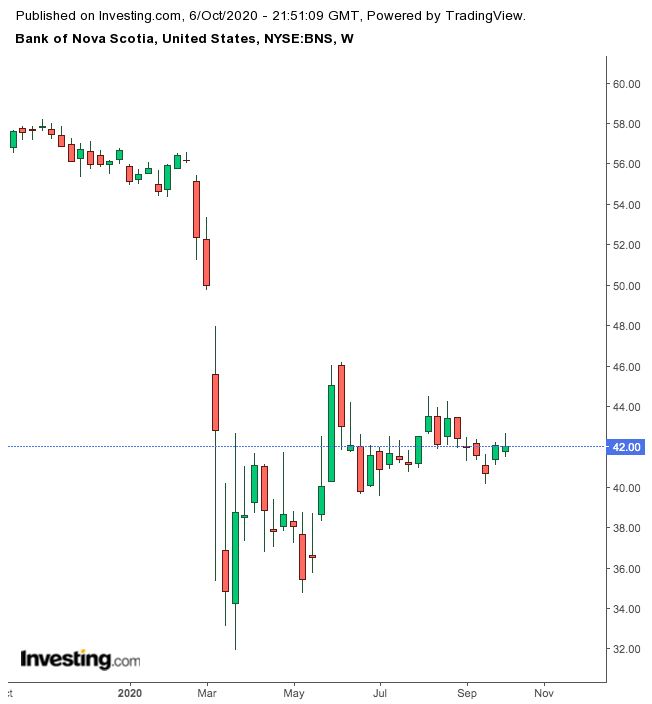 In a recent note, TD Securities analyst Mario Mendonca has assigned an “overweight” rating for the Canadian banking sector, which “will emerge from this crisis with their dividends, capital strength and earnings power intact.”

Scotiabank has paid dividend to investors every year since 1832, while it has hiked its payouts in 43 of the last 45 years.

Just like banks, Canadian telecom operators are also excellent dividend payers. With regulations barring foreign competition, their markets are protected and they’re able to charge higher rates for their services.

For these reasons, the nation’s largest telecom operator BCE Inc. (NYSE:BCE), (TSX:BCE) offers another avenue to earn a higher dividend yield in this low interest-rate environment. 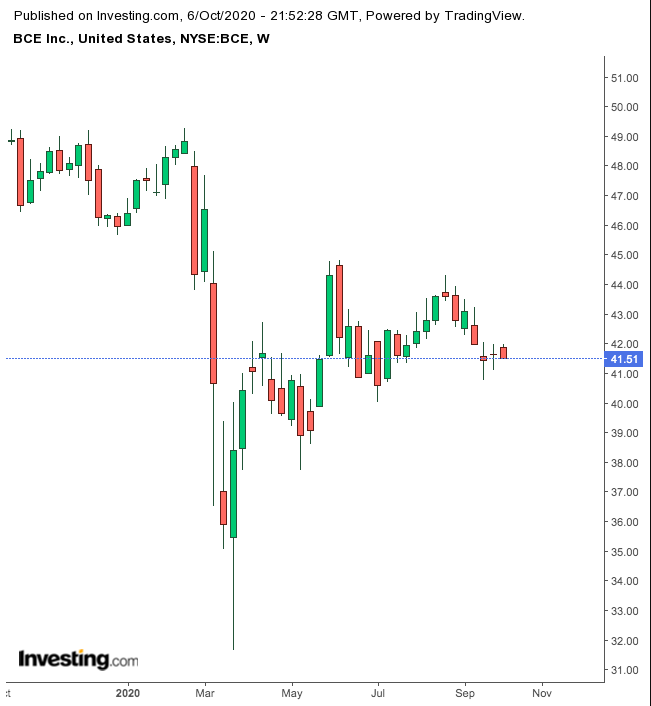 Telecom stocks tend to perform better when long-term interest rates are down because companies, such as BCE, use a lot of debt financing to fund investment cycles. When interest rates are low, it costs them less to maintain and refinance their debt.

This strong connection to long-term rates will allow BCE, also known as Bell, to recover quickly when the pandemic-related slowdown is over. But the stock’s higher yield shows that investors are in a wait-and-see mode as telecom operators struggle while the work-from-home environment hurts their wireless and media revenue.

Bell’s revenue was down by 9.1% year-over-year, and profits dropped by a staggering 64% during the second quarter, mainly hurt by a writedown on its media assets.

That sluggish period, which pressured BCE shares lower by 10% this year, is a buying opportunity in our view. BCE has long maintained a policy of increasing its dividend by 5% annually, which is enough to beat inflation. The company distributes between 65% and 75% of its free cash flow in payouts, which means it more than doubled its annual payout since the fourth quarter of 2008.