Tamara Rojo may be a great tragic dancer on stage, but in person she is far from the voice of doom. “The performing arts and dance have survived millennia,” she says, sitting in her office looking out onto a floor of empty desks. “They’ve survived pandemics and hundred-year wars and all kind of disasters. Getting together to share stories is intrinsic to humanity. People will gather, live performance will continue to exist.” Just maybe not quite in the way we’re used to, yet.

Ballet is finally putting its pointe shoes back on for a live audience. This month there are performances by the Royal Ballet, Northern Ballet and Birmingham Royal Ballet – and English National Ballet, where Rojo is artistic director, has just announced two live shows. In November, a live version of their upcoming digital season will feature five new short ballets at Sadler’s Wells, and in December there’s a slimmed-down version of The Nutcracker at the London Coliseum. Christmas isn’t quite cancelled after all.

There will be some drastic differences to pre-Covid shows, with less than half the usual audience (423 at Sadler’s instead of 1,400, and 1,100 at the Coliseum, where ENB usually sell out 2,300 seats). Will it be worth their while financially? “We are trying to find a way to not lose money, that’s all we want to do at this point,” says Rojo. “I passionately believe we need to restart the sector and rehire choreographers and technicians and lighting designers and composers and film-makers so that the engine starts moving, even if it doesn’t make financial sense.” 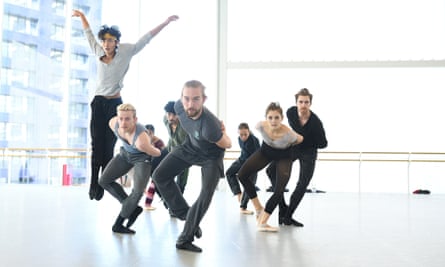 Making sure there’s still an industry on the other side of this pandemic is Rojo’s main concern. ENB had to furlough 85% of its workforce and many of the staff took pay cuts (20%-25% for most, more for Rojo herself). They haven’t replaced nine dancers who left this year, so the company is reduced in size. But on the upside, ENB’s swanky new Docklands building has seven studios, so there is plenty of room for distancing, and the biggest doubles as a stage, so they can broadcast from there. She thinks the UK’s larger and more established dance companies will be OK in the long term, but it’s the independent artists and freelancers and those working backstage who are in trouble.

“The situation cannot be sustained much longer. The loss of talent and skill breaks my heart,” she says. “The UK’s creative industries are the best in the world, consistently reinventing themselves and at the forefront of everything, it’s the reason for so many of us to be here.” She’s also worried about the ballet world internationally. Talking to directors and dancers in the US, she fears the lack of public subsidy there could mean even big institutions disappearing. “Nobody wants a smaller, less diverse, less interesting ballet world,” says Rojo.

Dance has taken a real hit, and it’s been more of a challenge to get dancers back to work than other art forms. “There is a physical reality about dance,” says Rojo, “it depends on physical contact, and you actually need space, you need to join together for the experience of class and rehearsal; the art itself is one of a group gathering and creating.” 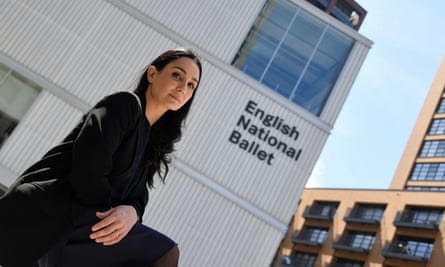 ENB’s dancers are working in bubbles, still maintaining distance where they can, but it’s not always possible. “In Nutcracker, there are things like the Sugar Plum Fairy pas de deux that has to happen,” she says. “So either they have to be household partners, or we have to do some testing and measures to mitigate the risk – the first thing being if you’re in that duet then you don’t mix with any other bubbles.”

Rojo was in the middle of choreographing her first ballet, a bold reimagining of the 19th-century classic Raymonda, when Covid struck. It’s been shelved for now – literally, she says, pointing to the files behind her desk – which stung, but she has plenty else to think about. The company had emergency funding from the Arts Council until September and has applied for a share of the much trumpeted GBP1.57bn arts rescue package. That government support is crucial, says Rojo, but she points out that in a good year the cultural industries are worth GBP111bn to the UK economy. So as generous as this is, it’s not going to go far enough. Maybe Covid will go away but the impact of it won’t, we’re going to need many years to recover financially from this.”

ENB normally plans three to five years ahead: uncertainty about the future is one of the most damaging things. “What we’re all asking for is a date, and I understand how difficult that is,” says Rojo, but there are other things that could help. “We need to look at theatre tax relief, and we need a government that underwrites insurance. If producers and theatres take on a Nutcracker season and then after the first show we have to close down, the loss will be disastrous. It is putting off people who would otherwise be hiring and producing from taking that risk.”

The one good thing that’s come out of lockdown is that it’s necessitated a focus on digital work, always very much a sideshow in the past. “We never paid it much attention or invested much in it,” says Rojo. But four million people have tuned in to the ballet classes Rojo ran from her kitchen, and a million joined the Wednesday Watch Party screenings of ENB’s ballets. “We reached people that no matter how much we danced, we never could have reached physically,” she says. “We had people waking up at 4am in Mexico to join our ballet class, or setting the alarm for 1am to watch our Emerging Dancer competition.” Getting people to watch is one thing, but will they pay for it? “That’s a big question,” she admits. “We had 2,000 people pay for Emerging Dancer, so that’s more than the theatre capacity, but is it enough to sustain a business model in itself? Probably not.”

Another silver lining, however, was that for the digital season (and the forthcoming performances at Sadler’s Wells) Rojo managed to snare two international choreographers she’d been trying to hire for years: Sidi Larbi Cherkaoui and Yuri Possokhov (making his first work for a UK company). “They’re too busy in normal times, but suddenly because of things being cancelled they had the time.” The other dances will be made by choreographers Arielle Smith, Russell Maliphant and Stina Quagebeur, each working with a different film-maker, and Rojo is excited about the results. “Despite everything, it’s a very creative moment for the company,” she says. “You can feel it in the corridors.” And very soon, on stage and screen as well.

o Reunion: An Evening with English National Ballet is at Sadler’s Wells, London, 19-21 November; Nutcracker Delights is at the London Coliseum, 3 December-3 January.