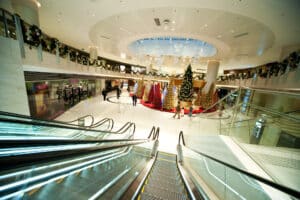 Retailers warned this weekend of a meltdown on the high street as they prepared to close their doors at the busiest time of the year.

Under the new lockdown restrictions, non-essential retail, hospitality and leisure businesses will be required to close for four weeks from Thursday — leaving many fearful of job losses and insolvencies. Retailers will be allowed to operate click-and-collect services, though.

The shutdown comes at a crucial time for beleaguered retailers: many would normally make most of their profits in the coming weeks. “Store closures in the run-up to Christmas inevitably have a severe impact on jobs and the economy,” said Alex Baldock, chief executive of Dixons.

In April and May, non-essential shops were losing £1.6bn in sales each week. “Now we are entering the Christmas shopping period, these losses are certain to be much bigger,” said Helen Dickinson, chief executive of the British Retail Consortium.

Waterstones chief executive James Daunt said: “In bookselling, you lose money 11 months of the year and make money in the 12th. In theory, we still have December, but in practice, we don’t. You can’t turn off a retail business, flick it back on and expect it to perform seamlessly.”

To the consternation of many high street bosses, supermarkets, collectively saving more than £2bn through the business rates holiday, will still be permitted to sell non-essential goods — and so will pick up a bigger slice of Christmas spending.

More than £76.9bn was spent on Christmas shopping in the UK last year, according to the Centre for Retail Research. Almost half of this activity takes place during November or just before.

Restaurants and pubs are now reaching breaking point. Ralph Findlay of Marston’s is worried that on reopening, there will still be challenges: “Many will struggle.”

The shutdown also heaps more pressure on landlords. Humphrey Cobbold, boss of PureGym, paid most of his rent in the initial lockdown, but warned: “If we close again, we will not be paying for periods we’re closed for.”