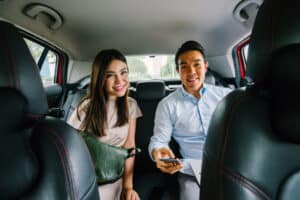 Since its inception, one of the many things that has separated Uber from other rideshare services has been its mutual rating system.

While far from unique, it has become one of the app’s defining features, and one which is designed to be as important to drivers as it is to passengers. Of course, in the name of their own safety, it’s perfectly understandable why those in the latter camp would want to know that their driver has been rated well by their previous customers. This may also explain why the app added a so-called “panic button” in 2018, putting riders in direct contact with the emergency services right from the Uber interface.

However, the rating system is a far more mysterious feature, with riders and drivers alike looking to improve their Uber ratings — this can work both ways. PCO car hire company Hirebrid notes that “it is in everyone’s best interests to rate well so that they can keep using the app without issue”. That said, in its current form, the process creates something of a courtesy deadlock, where even the most frustrated passengers and drivers will instinctively give the other person a five star rating.

But if this stalemate is what keeps these scores high, what does it take for a driver or passenger to get a bad Uber rating? And how important are they in the first place?

What counts as a bad Uber rating?

According to information leaked in 2015, a driver will be booted off the platform altogether if their rating dropped to under 4.6 stars out of 5. And while there hasn’t been an equivalent figure released for passengers, a 2019 change in Uber policy puts them at risk of having their accounts revoked if their rating falls too low as well.

However, anecdotal evidence gathered before these new terms and conditions shows that drivers are understandably picky about how well-regarded their potential fares are. As one driver for both Uber and Lyft puts it, “a rating in the high 4.9s is the sweet spot” but “if you’re below a 4.6, you can forget about me ever picking you up.”

What can passengers do to improve their Uber rating?

Think about how you behave when a friend gives you a lift somewhere — keeping your Uber rating up as a passenger is arguably as simple as that. Uber offers their own guidance on the matter, recommending being punctual for your driver’s arrival, keeping your seatbelt on, behaving politely towards your driver, and not making a mess in the car.

However, as we mentioned earlier, the rideshare app can be somewhat cagey about all of the details which impact their rating system, and the more interesting behaviours to avoid in the back of an Uber are also rooted in anecdotal evidence. In an article published by The Verge in the wake of the rating system leak, one Uber driver alluded to a hardly-shocking “no sex rule” — “with drivers or fellow riders,” he adds.

However, an ex-driver believes that the company’s revised guidelines “don’t [actually] do much to change” things for its riders, and believes that “only the egregious stuff can get you kicked off the platform as a passenger.” This may be why more recent amendments to the policy have promised to revoke Uber privileges for riders whose rating drops below a certain mystery figure, giving drivers the opportunity to leave specific reasons for giving a low score.

What can drivers do to improve their Uber rating?

With more at stake for those who drive for the app, and a set minimum rating to aim for before action is taken, Uber drivers need to do everything they can to stay above the 4.6 star rating. The main thing for drivers to bear in mind is to simply be polite towards your passengers. Personable greetings and goodbyes and assistance when passengers want to make use of the boot are good habits for drivers to have.

Other tips may even benefit the driver such as following a passenger’s guidance on a route rather than taking a preferred route. This may end up taking longer, which means more money in the drivers pocket. Other courtesies, such as checking in with those in the backseat about how comfortable they are, turning the air conditioning on or off as requested, or even changing radio stations to their music of choice, will all go a long way towards those all-important five stars.

Read more:
How much do Uber ratings matter?

5 Reasons you need to buy a GoPro for vlogging today