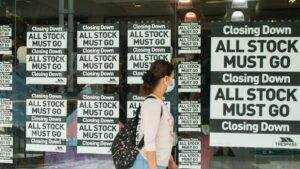 The second lockdown will plunge Britain into a double-dip recession, economists warned yesterday as they downgraded their forecasts for the UK economy sharply.

Tighter restrictions will obliterate the country’s fragile economic recovery, causing final-quarter GDP to shrink by as much as 8 per cent and undoing the progress of the summer months.

The reopening of shops, restaurants and pubs over the summer helped the economy to rebound sharply from the first lockdown, but by the end of the summer output was still 9.2 per cent smaller than its pre-crisis peak.

Economists were already anxious about the winter months, warning the recovery was losing steam in the face of rising unemployment and regional lockdowns. They were expecting growth to flatline in the final quarter but that now looks impossible.

Howard Archer, chief economic adviser to the EY Item Club, said output was likely to contract by 5 to 8 per cent in the final quarter. This was revised down from a previous estimate of +0.3 per cent. “There seems little doubt a renewed national lockdown will cause the economy to contract in the fourth quarter — and very possibly by an appreciable amount,” he said.

The lockdown heightened tensions between business and the government, with:

• The CBI boss Dame Carolyn Fairbairn urging ministers to “roll-out mass testing as a matter of national urgency” and telling Sky News that relations with Downing Street “could be a lot better”;

• The Institute of Directors saying the government made a mistake in ending its suspension of the “wrongful trading rules” and urging ministers to reinstate it immediately to help prevent “a flood of insolvencies”; and

• A pushback from entrepreneurs with Charlie Mullins, the Pimlico Plumbers chief, lamenting “the business community has been sold down the river” and Hugh Osmond, who helped to build Pizza Express, apologising to 30 people he planned to employ at a new restaurant because “you’ve just been screwed over by a bad PowerPoint presentation, lousy data and a hopeless strategy”.

Paul Dales, economist at Capital Economics, said output could contract by 5 per cent in November alone, costing the economy £25 billion. Growth will rebound by between 4 and 5 per cent in December unless the lockdown is extended. “The recovery has been quite good and we were making progress but it will go into complete reverse in a short while,” he said.

The hit to growth is unlikely to be as bad as it was in April, when output contracted by almost a fifth. With schools and universities staying open, education output should hold firm this time. Other sectors will also benefit, as parents will be able to continue working.

Policymakers will have to step in with more support for the economy over the coming months. The Bank of England is widely expected to commit to another £100 billion of asset purchases on Thursday, while the Treasury is boosting its income support schemes.

The job-retention scheme, which is being reinstated to pay 80 per cent of the salaries of workers who have been furloughed, could cost as much as £8 billion. About two million people are currently on furlough, at a cost of £4 billion a month, but analysts said that number could double to four million people.

The direct costs of more state support, along with the indirect costs of weaker tax revenue and higher social security spending, will add to Britain’s soaring public debt.

Borrowing from April to September was nearly four times the £54.5 billion borrowed in 2019.