PHILIPPINE MANUFACTURING data worsened in October as demand remained weak and job cuts persisted amid a coronavirus pandemic, according to a survey by British information provider IHS Markit Ltd.

The country’s manufacturing Purchasing Managers’ Index (PMI) dropped to 48.5 last month from 50.1 in September, the seventh time the index fell below the 50 neutral mark.

It was better than record lows posted at the height of the pandemic in April, when strict lockdowns were enforced. 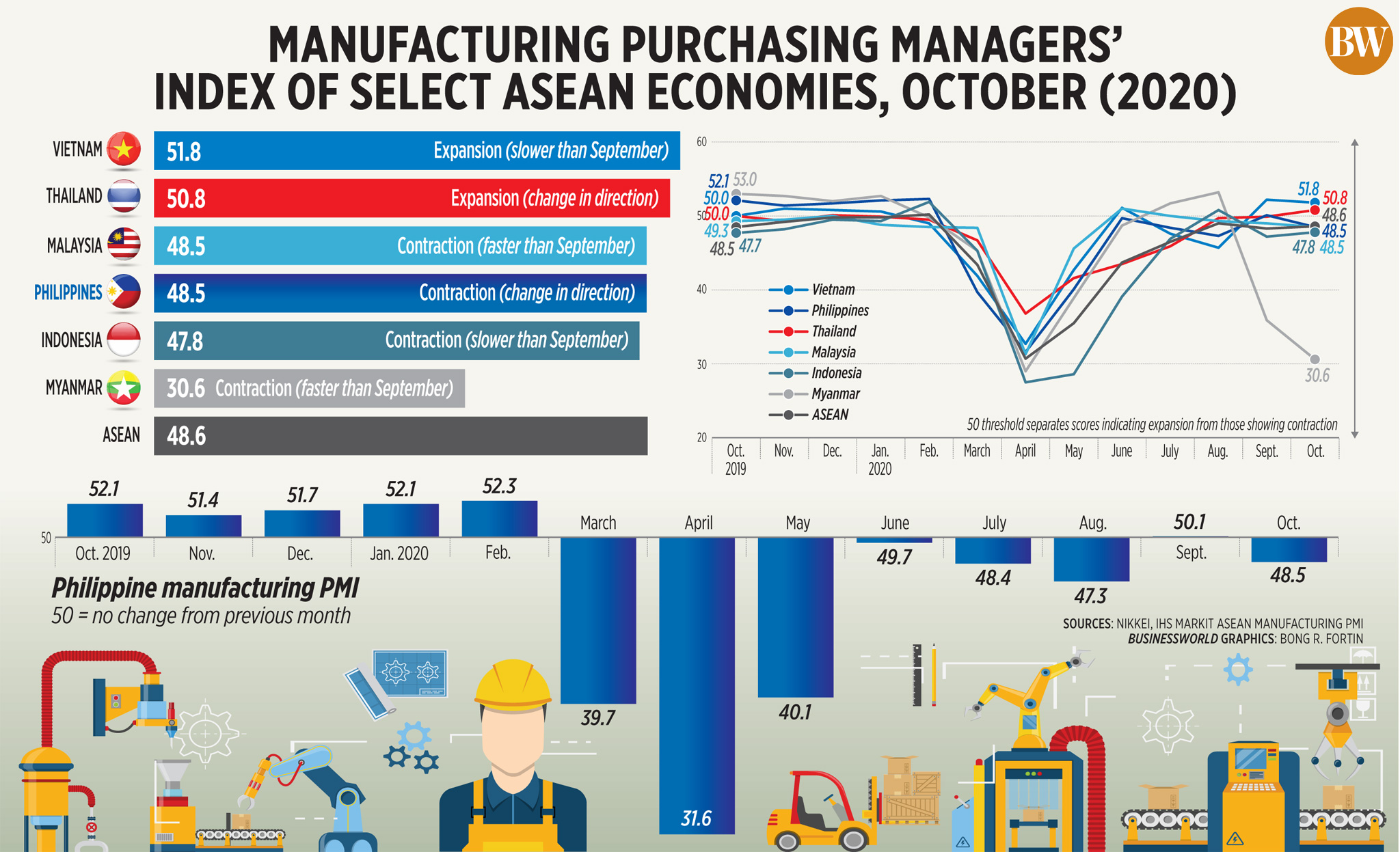 A reading above 50 means manufacturers reported an improvement, while falling below the threshold indicates worsening conditions.

“Despite broadly stabilizing in September, the latest PMI data signaled that operating conditions across the Philippine manufacturing sector worsened in October as the economic fallout from the coronavirus disease 2019 (COVID-19) pandemic persisted,” IHS Markit said in a statement posted on its website.

Business confidence remained positive, however, and improved amid hopes of higher production in the year ahead, according to the statement.

“This decline may be telling us all that the reopening might be causing some momentary upticks, but demand itself has yet to resurrect from the deep decline,” Ruben Carlo O. Asuncion, chief economist at UnionBank of the Philippines, Inc. said in an e-mail.

“It may also be signaling a long challenging road to recovery to pre-COVID-19 levels of domestic and external demand,” he added.

The Philippines tied with Malaysia in third place among six Association of Southeast Asian Nations, trailing behind Thailand, whose index improved to 50.8 and Vietnam’s 51.8.

The country’s index was slightly below the 48.6 regional average, but still better than Indonesia (47.8) and Myanmar (30.6).

The index for most of Asia showed manufacturing conditions improved in October, with strong global demand for electronics expected to lift the sector in the coming months, Alex Holmes, an economist at Capital Economics, said in a note on Monday.

The survey also found that new orders fell again last month after a brief uptick in September, mainly due to weaker domestic demand. This was tempered by higher new orders overseas, which rose for the second straight month.

Manufacturing companies in the Philippines cut staffing levels sharply, with employment falling for the eighth straight month, it said.

“Another monthly reduction in backlogs of work highlighted evidence that spare capacity persisted across the manufacturing sector,” it added.

A renewed fall in new order inflows led companies to reduce their stores of inputs. Stocks of both raw materials and finished goods were depleted, which companies linked to supplier shortages and demand uncertainty, IHS Markit said.

IHS Markit said the reopening of businesses would support a pickup in the economy, although coronavirus infection rates in the Philippines remained high compared with regional peers.

“Until virus cases are tamed domestically and globally, we are likely to see a protracted recovery in manufacturing production,” Shreeya Patel, an economist at IHS Markit, said in the statement.

Meanwhile, input prices at Philippine companies increased due to higher raw material costs and supplier surcharges. The rise, however, was the slowest since May.

Output prices also rose marginally. Those that reported an increase said they had passed on the higher cost burdens, while those that posted lower charges said the move was part of discounting strategies to attract more buyers.

Manufacturers were expecting production to increase next year on expectations of further expansion plans and new products.

“The degree of confidence was below the long-run series average, however, as some firms continue to expect that COVID-19 will have a long-term impact on production,” it added.

“The manufacturing sector is still picking up the pieces but will slowly recover in the coming weeks and months as the economy slowly goes back into a semblance of normalcy,” he said in an e-mailed reply to questions on Tuesday.

Lockdowns in most areas of the country have been eased since June as the government tries to revive the economy, which is expected to shrink by 6% this year.

Oxford Economics said in a note on Monday deteriorating external conditions amid renewed quarantines in some parts of Europe might threaten the gains recorded in most Asian economies after the lockdown.

“With external conditions deteriorating anew amid lockdowns in parts of Europe, we expect the downward pressures to intensify,” the think tank said. “A (Joe) Biden win in the US elections would provide some relief, but positive impacts might not be felt until H2 2021.”

The 2020 US presidential election is scheduled for Nov. 3. Voters will choose presidential electors who in turn will vote on Dec. 14, to either elect a new president and vice-president or reelect the incumbents Donald Trump and Mike Pence, respectively.