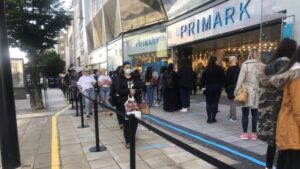 The owner of Primark has warned that fresh coronavirus closures enforced on the discount fashion chain will result in a £375m hit from lost sales.

Associated British Foods (ABF) was among the first public companies to declare an expected loss as businesses count the cost of toughening COVID-19 restrictions.

It said around 57% of Primark’s store estate would be shut down if parliament approves plans to shut non-essential shops for a month in England from Thursday.

The store-only chain is particularly vulnerable to such restrictions as it has consistently refused to trade online and mitigate such a hit to its business coming, as it does, in the core Christmas trading period.

It is not understood whether it was planning to tap the extended furlough scheme, as it did during the original lockdown, to help pay staff wages. Further details were expected in the group’s full-year results on Tuesday.

ABF said that all Primark stores in the Republic of Ireland, France, Belgium, Wales, Catalonia in Spain and Slovenia were already temporarily closed, representing 19% of selling space.

The company added that stores in some other countries were operating reduced hours.

ABF said: “We are implementing the operational plans developed to manage the consequences of these closures and appropriate action will be taken to reduce operating costs.

“All orders placed with our suppliers will be honoured.”

Shares fell 4% at the open, with the likes of JD Sports and Next also among big retail names taking a hit as investors gave their first reaction to news of England’s looming lockdown.

However they later recovered to end 1.4% higher.

ABF’s annual results are, however, expected to recognise only a limited impact on Primark’s sales because of a boost from pent-up demand in the wake of the first lockdown conditions across its key European markets.

Another high street operator to warn of a potential hit on Monday was the betting group behind Coral and Ladbrokes.

GVC said it expected a £34m dent to profits if its shops were forced to close during November as the government has planned.

The company said the impact from closures in other UK regions will be £27m – and £10m in other European countries already experiencing their own second lockdowns.

Its shares fell more than 3%.

Susannah Streeter, senior investment and markets analyst at Hargreaves Lansdown, said of Primark’s update: “The company may well regret its resistance to creating an online presence, as it can’t make up the shortfall in digital sales.

“Already 19% of its stores have been forced closed, due to lockdowns across Europe. Being forced to shut its shops in England would mean in total 57% of its estate would be shut down.

“It’s easier for the company to assess the potential damage given that Primark sales took a huge hit earlier in the year during the first lockdown. Pent up demand for fashion saw customers flood back in the summer but that profit would be wiped out, if doors are locked during the key Christmas period.”

Heathrow in legal challenge over government ban on VAT-free shopping