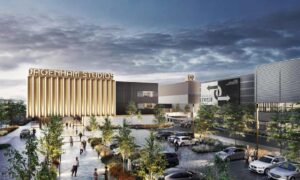 A US property developer that owns studios where films including Gone with the Wind and TV shows such as The Sopranos were filmed is investing £300m to build a Hollywood-style production complex in Dagenham, east London.

Hackman Capital Partners, the owner of sites including Culver Studios in Los Angeles and Silvercup Studios in New York, has agreed to invest £300m over the next three years to develop the site with the first productions due to start filming by mid-2022.

“Dagenham used to be famous for factories and Fords but in the future we will be equally famous for making films,” said Darren Rodwell, the leader of Barking and Dagenham council. “It’s about bringing in thousands of jobs, providing education and training opportunities for local young people, and giving people hope in these gloomy Covid times.”

The council estimates the studio will create 1,200 jobs and contribute £35m a year to the east London economy. The Studios site will include 12 sound stages over 4.5 hectares (11 acres), about two-thirds the size of Pinewood, the home of the Star Warsand James Bond franchises.

“This is a very special moment for Dagenham, our capital and all those who have been working hard to realise this bold vision of bringing a new world-class film studio to east London,” said the mayor of London, Sadiq Khan.

The plan to build a studio in east London has been a challenging venture for the council, which was forced to seek a new investor after its original backer, Pacifica Ventures, pulled out last year citing Brexit uncertainty.

While the coronavirus pandemic brought the film and TV production industry to a halt the UK remains a world leading location for Hollywood blockbusters and big budget TV dramas. More than 200 films and 120 high-end TV shows – those costing more than £1m an episode, such as The Crown – were made in the UK last year with a total production spend of £3.1bn.

In the last two years, Disney and Netflix have struck long-term deals with Pinewood and sister studio Shepperton Studios to secure production space to ensure an uninterrupted flow of content. Sky and The Fast and the Furious maker Universal Studios, both owned by Comcast, are building a Hollywood-style film studio at Elstree in north London.

“Today’s announcement is proof that the private investment climate is resilient,” said Adrian Wootton, the chief executive of Film London and the British Film Commission.