THE OVERALL year-on-year increase in prices of widely used goods rose to its fastest pace in three months in October, the government reported on Thursday.

Preliminary data from the Philippine Statistics Authority (PSA) showed headline inflation at 2.5% in October, picking up from the 2.3% pace the month before.

The October inflation result marked the fastest pace in three months or since the 2.7% reading in July 2020. 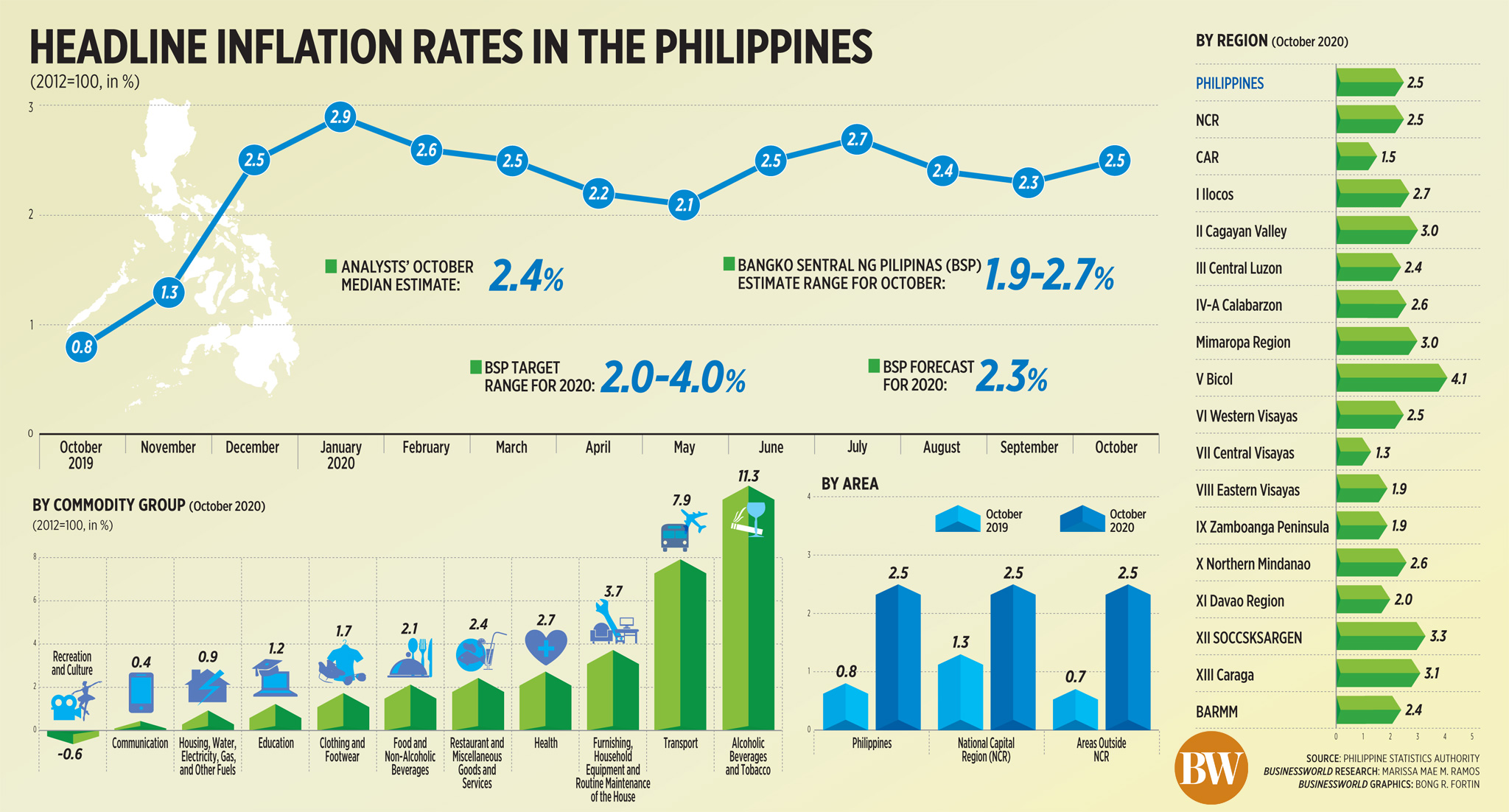 The latest headline figure is higher than the 2.4% median in a BusinessWorld poll conducted late last week and falls within the 1.9-2.7% estimate given by the Bangko Sentral ng Pilipinas (BSP) for October.

Year to date, inflation settled at 2.5%, still within the BSP’s 2-4% target this year, but above the 2.3% forecast for the entire year.

Core inflation, which discounted volatile prices of food and fuel, stood at three percent in October — slower than the 3.2% in the previous month, but faster than the 2.6% a year earlier. It averaged 3.1% so far this year.

The PSA also noted faster annual rates in the indices of education (1.2% from one percent in September) and restaurant and miscellaneous goods and services (2.4% from 2.3%).

In a statement, the National Economic and Development Authority (NEDA) said October inflation remains within the government’s target, but noted “upside risks” such as the impact of typhoons and ongoing outbreaks of African swine fever (ASF) in parts of the country.

“Aside from the ongoing pandemic, the country has been facing adverse weather conditions in the recent months. Effects of typhoons and La Niña on the agriculture sector and food prices pose upside risks to inflation,” Acting Socioeconomic Planning Secretary Karl Kendrick T. Chua was quoted in the statement as saying.

The food-alone index likewise accelerated to 2.1% versus the previous month’s 1.5%. This marked the first time food prices picked up following five consecutive months of slowing down.

“Meanwhile, base effects were also one reason for the bounce in inflation with October 2019 representing the low point for last year’s inflation swoon,” Mr. Mapa said.

University of Asia and the Pacific (UA&P) Senior Economist Cid L. Terosa noted the increase in prices of food and essential services, as well as the increasing trend towards online transactions, activities, and services that “pushed demand and prices for required equipment and facilities.”

“Meanwhile, many business and personal services incurred greater costs because of the need to follow and maintain best health practices to ward off an uncontrollable increase in COVID-19 cases. These incremental costs could have been passed on to consumers,” he added.

In a note sent to reporters, ANZ Research Chief Economist Sanjay Mathur and Kanika Bhatnagar viewed the rise in food prices and overall inflation as a “one-off event that should moderate over the next few months.”

“We continue to expect overall price pressures to remain mild and not present any challenge to the current monetary policy stance,” they said.

In a statement, the BSP affirmed the latest inflation results as being consistent with their “prevailing assessment of favorable inflation dynamics over the policy horizon.”

“The balance of risks continues to lean toward the downside due largely to the impact on domestic and global economic activity of possible deeper economic disruptions caused by the pandemic,” the BSP said.

RATES LIKELY ON HOLD
Meanwhile, the BSP is expected to keep policy settings unchanged in its next Monetary Board meeting on Nov. 19, before its final meeting for the year on Dec. 17.

The BSP has slashed key policy rates by 175 basis points (bps) this year to support the economy amid the pandemic. This has brought down the overnight reverse repurchase, lending, and deposit facilities to 2.25%, 2.75%, and 1.75%, respectively.

“Interest rates are already at record-lows, and the economy is still on the very early stages of a recovery,” HSBC Global Research Economist Noelan Arbis said in a note, adding that a policy rate cut of 25 bps is expected as early as the first quarter of 2021.

“Bank lending growth also continues to decline, despite low interest rates and ample liquidity in the market, which suggests that corporate and individual borrowers remain wary of adding leverage given ongoing economic uncertainties. This means that a containment of the virus domestically and a re-opening of the economy are likely to be prerequisites before additional rate cuts lead to a pickup in loan growth,” he added.

“Governor [Benjamin E. Diokno] has reiterated that he would likely keep policy rates untouched over the course of the next two quarters with real policy rates now negative (-0.25%) and after rolling out a series of aggressive rate cuts in 2020. He did note that he would take the latest inflation reading and next week’s [third-quarter] GDP report into consideration at their next policy meeting, but we forecast a pause from BSP well into 2021,” Mr. Mapa said.

“We expect inflation to settle at 2.4% for the year as anemic domestic demand to keep a lid on price gains with BSP content with providing liquidity support via its bond purchase program to help stimulate recovery,” he added.

For UA&P’s Mr. Terosa: “The monetary policy stance will remain to be cautiously expansionary in character. This means that monetary policy will accommodate quick adjustments to either inflationary or deflationary trends based on disciplined and evidence-based monetary policymaking.” — Jobo E. Hernandez with inputs from Beatrice M. Laforga and Luz Wendy T. Noble