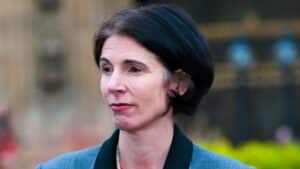 Rishi Sunak’s five-month extension of the furlough scheme has been hailed by industry leaders as a “bold and much-needed” lifeline through a bleak winter for thousands of companies.

The chancellor’s decision to preserve the taxpayer-funded scheme until March — at an estimated cost of £30 billion — prompted lobby groups to urge the Treasury to go further, warning that many businesses would collapse unless it filled “significant gaps”.

Rain Newton-Smith, chief economist at the CBI (pictured) , said that Mr Sunak had “built a bridge for business to spring 2021 and taken much needed steps to help firms across the UK survive this winter.”

Leading economic commentators are divided over the latest measures, with the Institute for Fiscal Studies (IFS) criticising “wasteful” grants for the self-employed.

The job retention scheme, set up in April, will now run until March 31, with furloughed staff receiving 80 per cent of their standard wages up to £2,500 a month. As of last month, 9.6 million workers had been furloughed by 1.2 million companies, with claims of £41.4 billion. Self-employed workers can apply for a third income support grant, which will increase from 55 to 80 per cent of their average profits, up to £7,500.

Some businesses said the support did not go far enough. Jonathan Downey, a bar and restaurant owner, said: “Like every single one of Rishi’s last four measures, it’s too little, too late. We made 24 people redundant at the end of August. We can’t get those jobs back. We made another 14 in September. We can’t get those back either. They’ve had their P45s.”

The furlough scheme is “great for employees, but it doesn’t save businesses”, he added.

Others were critical of the extension. Luke Johnson, chairman of the Brighton Pier Group, wrote on Twitter: “Extending furlough until March is simply a Ponzi scheme — government funding of millions of jobs is wholly unsustainable and creates perverse incentives and unintended consequences.

Extending furlough until March is simply a Ponzi scheme – govt funding of millions of jobs is wholly unsustainable and creates perverse incentives and unintended consequences. They are buying compliance to stave off civil unrest to pursue their psychotic lockdown strategy.

“They are buying compliance to stave off civil unrest to pursue their psychotic lockdown strategy.”

The Federation of Small Businesses said the intervention was an “acutely needed injection of confidence” for the private sector but urged ministers to go further.

“Unless significant gaps in the business support landscape are addressed there will be far fewer jobs to furlough as we head into the winter,” Mike Cherry, its national chairman, said. “The chancellor has taken a step forward today, but there is still more work to do.”

Many new business owners, sole traders, company directors and entrepreneurs were “largely excluded” from state assistance, he added. “That urgently needs to change.”

The call was echoed by the Institute of Directors, which praised Mr Sunak for making the “right call” but claimed he was “still failing to fix major gaps” elsewhere. “Many self-employed, including small company directors, continue to be left out in the cold,” Jonathan Geldart, its director-general, said.

He acknowledged that state-funded furlough would assist firms with their cashflow during the first quarter, “particularly in light of potential Brexit impacts”.

ADS, which represents the aerospace, defence and security sectors, said that the extension would “help employers to sustain vital highly skilled jobs in every part of the UK”.

Torsten Bell, chief executive of the Resolution Foundation, welcomed the announcement this afternoon but bemoaned that it followed a “two-month, five-stage U-turn”. The think tank estimates the extension is likely to cost about £6.2 billion per month.

Paul Johnson, director of the IFS, said he was “taken aback” by the chancellor’s statement, which suggested nothing had been learned since March. There was “no effort” to target support at specific struggling sectors, he wrote on Twitter.

Mary Portas, the retail consultant and broadcaster, told Times Radio that more companies would collapse in the sector during the “ridiculously tough” months ahead despite the additional support. “Of course it’s going to be a big help, but clawing back those lost sales — so many of them will never be able to do that,” she said. “The worry is you’re furloughing the staff but your business is not doing any turnover.”

Len Shackleton, research fellow at the Institute of Economic Affairs, said that the move increased the chance of tax increases in years to come. “It means that we will still be keeping substantial numbers of people in artificial ‘employment’ when there is little prospect of their being able to return to work in their pre-pandemic job,” he said.