THE PHILIPPINE ECONOMY is expected to have declined in the third quarter, though slower pace than the previous quarter, according to economists.

A BusinessWorld poll of 19 economists yielded a median gross domestic product (GDP) decline of 9.2% for the third quarter, easing from the record 16.5% plunge in the second quarter.

This will bring the GDP contraction to 8.8% in the first three quarters of 2020, exceeding projections made by the government and financial institutions for the full year. 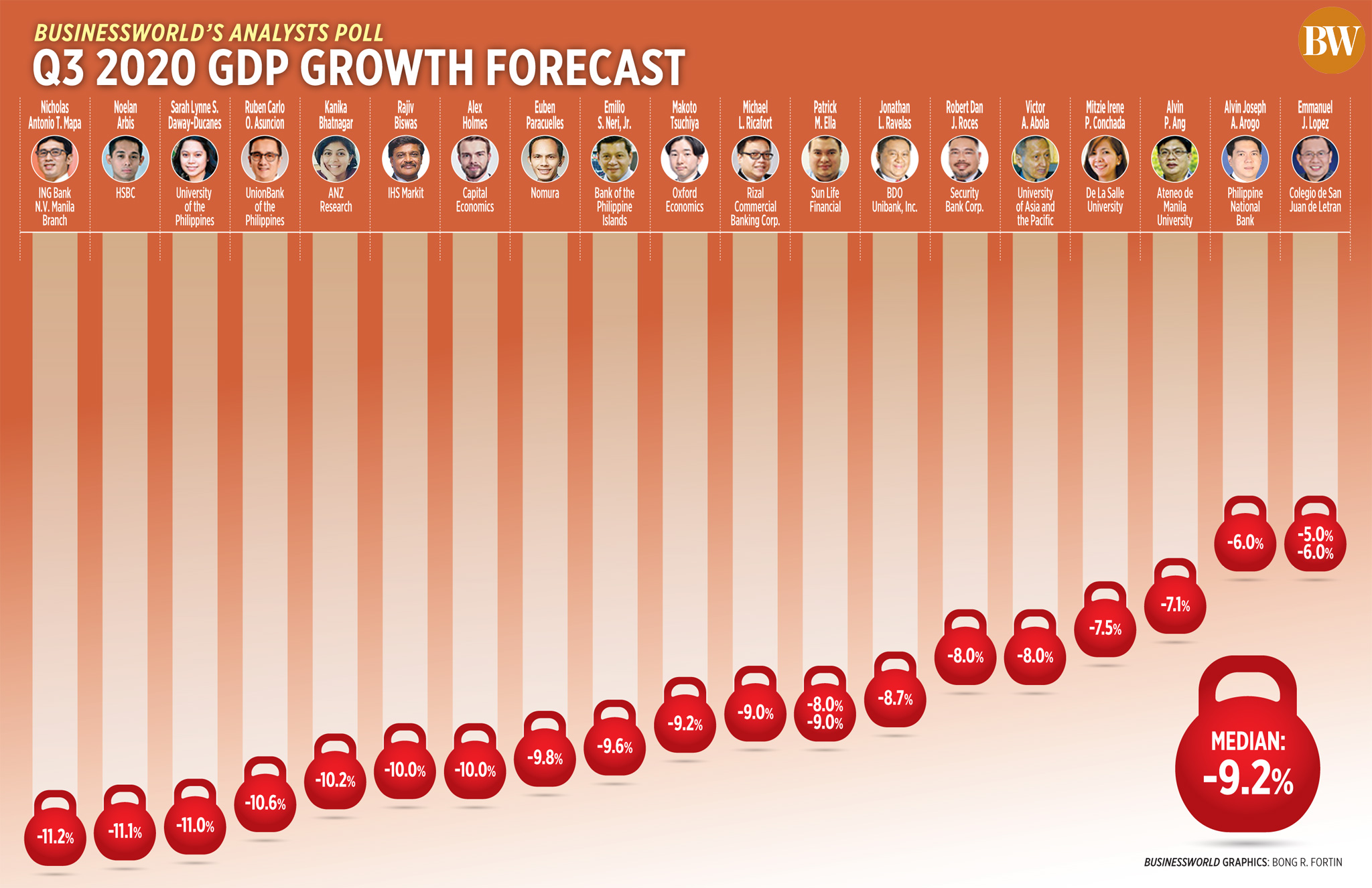 In July, the Cabinet-level Development Budget Coordination Committee (DBCC) projected the economy to shrink between 4.5% and 6.6%, or an average of 5.5% this year.

At an online forum on Oct. 20, Finance Secretary Carlos G. Dominguez III said the DBCC expected the Philippine economy to contract “by about 6%” for the entire year.

Socioeconomic Planning Acting Secretary Karl Kendrick T. Chua had said the decline in third-quarter GDP was expected to be softer than in the second quarter. For the first half, the economy fell by 9% as economic activity was halted during the strict lockdown from mid-March to May.

The Philippine Statistics Authority will report third-quarter GDP data on Tuesday, a day after the release of third-quarter data on farm production.

Economists polled by BusinessWorld attributed the slower pace of economic contraction in the third quarter to relaxed lockdown restrictions.

“Given an easing of the quarantine measures, as well as a slower decline in production indices, the third quarter is expected to be better than the second quarter, but not by much,” said University of the Philippines School of Economics Associate Professor Sarah Lynne S. Daway-Ducanes in an e-mail.

Bank of the Philippine Islands Lead Economist Emilio S. Neri, Jr. pointed to monthly economic indicators such as employment, external trade and manufacturing purchasing managers’ index as supporting the likelihood of a slightly better performance in the third quarter.

Economists also pointed out third-quarter GDP was dented by the return to a modified enhanced community quarantine in Metro Manila and in nearby areas from Aug. 4 to 18.

“Our estimate would have been closer to -5% than -10% if it had not been for the tighter August lockdown measures. After seeing the NG’s slow spending in the third quarter, our estimates approached the -10% level,” Mr. Neri said.

OUTLOOK
The economy may have bottomed out in the second quarter, but economists noted the pace of recovery remains uncertain.

“With government spending held back to close out the year, we expect GDP to remain in double-digit contraction with consumption and investment activity still well away from 2019 levels (we’re actually at 2016 levels),” said ING Bank N.V. Manila Senior Economist Nicholas Antonio T. Mapa in an e-mail.

“The lack of a potent and timely spending plan to counter the economic downturn will translate to a -9.8% GDP print for the year, with the Philippines likely not recovering to pre-pandemic growth momentum in the near term as potential output fades with investment momentum headed in the wrong direction,” he added.

Makoto Tsuchiya, an economist from Oxford Economics, said the recovery in private consumption will be held back by high unemployment, gloomy consumer sentiment and lower remittances.

BDO Unibank, Inc. Chief Market Strategist Jonathan L. Ravelas, estimated the full-year GDP slide to reach 8.3%, but noted it may be adjusted due to recent typhoons in the second half that affected agriculture — one of the few bright spots in second-quarter GDP performance.

Capital Economics’ Asia Economist Alex Holmes said improvements “are likely harder to come by in the quarters ahead.”

“With the virus still not under control, continued social distancing will be required and life is unlikely to be able to fully return to normal. Meanwhile, economic scars from the downturn, including business insolvencies, weaker household balance sheets and high unemployment will drag on the recovery,” he said.

“As such, we suspect that by the end of the year the Philippine economy will still be almost 7% smaller than its pre-crisis level,” he added.

How to become a web developer: TSG Training