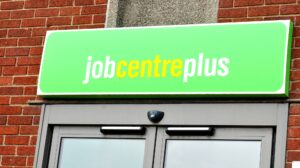 The UK’s unemployment rate rose to 4.8% in the three months to September, up from 4.5% as coronavirus continued to hit the jobs market.

Firms made more workers redundant in anticipation of the end of the furlough scheme, which was originally supposed to finish at the end of October.

It will now last until 31 March.

The number of people out of work rose by 243,000 in the three-month period, the largest increase since May 2009.

ONS deputy national statistician for economic statistics Jonathan Athow said that a “shake-out” was now happening in the labour market.

“We’re seeing fewer people on the payrolls and fewer people employed overall. That is now passing through to increasing unemployment altogether.”

He added: “More people are being made redundant. Those are people that have already left work. It’s not an indication of future job losses, but we are starting to see people fall out of work in quite large numbers.”

Mr Athow said there were still about 2.5 million people on furlough, with “quite a lot of uncertainty” about what would happen to them.

“We might see furlough creep up again and that might mean we don’t see any further big increases in redundancies or unemployment, but it’s way too early to tell what will happen,” he added.

Mr Athow said vacancies continued to recover from the very low numbers seen earlier in the year, but those figures predated the reintroduction of lockdown restrictions in many parts of the UK.

Jonathan Boys, CIPD Labour Market Economist comments: “A modest recovery in hours worked reflects the summer reopening when large numbers of people gradually moved off furlough. Some sectors were able to make hay while the sun shone, but we now know coronavirus cases were rising. Furlough helped to limit jobs losses and protected incomes, and it is therefore right that the Government has extended it until the end of March – especially in light of promising news on a vaccine. This will boost business confidence and help stabilise employment through to the spring. Businesses now have a scheme that they understand and a reasonable timeframe in which to conduct workforce planning.

“However, unemployment rose sharply this quarter and redundancies increased by a record number. The CIPD’s latest forward-looking Labour Market Outlook report suggests that redundancy activity will remain high in the three months to December and could therefore surpass the total number experienced after the financial crash. The economic pain of the pandemic has been cushioned by furlough and other government support schemes but will start to increase over the winter. We believe the Government needs to do more to help people upskill and reskill beyond what’s been outlined in the Kickstart scheme and Lifetime Skills Guarantee. This includes reforming the Apprenticeship Levy and increasing access to lifelong learning.”

Read more:
UK unemployment rate continues to surge in the past three months