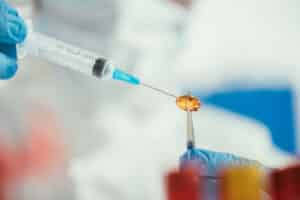 Ahead of USANA Health Sciences (USNA) third quarter earnings report to be released on October 20th, the nutritional supplements and health products manufacturer delivered a year-over-year increase in earnings on higher revenues, according to Zack’s Equity Research.

The investment research firm stated USANA’s revenues for the quarter are expected to be up 7% from the previous year at $278.7 million, while also posting quarterly earnings of $1.27 per share, a year-over-year change of 16.5%. With 20 markets across the globe and over 24 years as a publicly traded company, USANA’s commitment to transparency and quality products has proven to generate consistent revenue growth and value.

Wentz has stated that it was the loss of his father to heart disease when he was a teenager as well as watching many of his other relatives suffer from degenerative diseases that spurred his desire to start a diagnostic testing company and later go into manufacturing health products.

Many of the laboratory arrays developed for viral diseases by Gull Laboratories were some of the first of their kind to be approved by the FDA, but Wentz sold his controlling interest in the company in order to found USANA, citing a desire to work toward preventing degenerative diseases through proper nutrition rather than diagnose them.

By 1996, USANA was operating a large facility and corporate headquarters located in West Valley City, Utah. In a strategized effort to establish transparency and instill confidence in the young company, USANA filed for an IPO and became a publicly traded company on the NASDAQ National Market System. In 2010, it completed the application process to transfer the listing of its common stock to the New York Stock Exchange, with the transfer becoming official at the beginning of 2011.

Myron Wentz operated as chief executive officer until 2008, when his son Dave Wentz succeeded him with Myron continuing on in his role as chairman of the board.

Prior to assuming the role, Dave Wentz had held the position of president of the company since 2003 as well as other positions such as executive vice president and senior vice president of strategic development. In 2009, Forbes.com named Dave Wentz one of America’s 20 Most Powerful CEOs 40 and Under, and the company saw multiple years of record sales growth during his tenure such as in 2015 when revenue rose 16.2 % to $918.5 million.

After a year in which he operated as co-CEO with former president of the Americas, Europe and South Pacific Kevin Guest, Wentz stepped down and Guest became sole CEO in November of 2016, a role he still holds currently.

USANA consistently goes out of its way to establish transparency, and has earned rewards for such efforts and for its business performance. For three years in a row it was in the top twenty on Forbes “200 Best Small Companies” list, and for seven years in a row it was voted one of OUTSIDE Magazine’s “50 Best Places to Work.”

The company seems to have been an early recognizer of the importance of sustainability not only for the health of the planet but also the long-term value it creates for a business, having been one of the founding members of the Climate Registry in 2007 and an EPA WasteWise member, EPA Green Power Partner, and most recently has taken the Utah Sustainable Business Coalition pledge. In 2013 the company announced plans to build a new manufacturing facility in China due to the high demand it was experiencing in that market, with the 350,000-square-foot building opening in 2016.

Most recently, USANA was recognized as a top revenue generator by Direct Selling News. The leading industry publication’s aim is to showcase a transparent industry and provide credibility and research to support those seeking information on direct selling companies, and USANA was ranked number 16 in DSN’s “Global 100” list, up two spots from 18 in the 2019 edition.

The “Global 100” list is created each year based on revenues to acknowledge the success of individual direct selling companies and to provide a clear picture of the magnitude of the industry. In 2019, USANA generated revenues of $1.061 billion, marking the fourth year in a row the company had achieved billion-dollar sales.

GuruFocus, an online financial news and research platform, recently gave USANA a ranking of 9 out of 10 in financial strength and profitability. This score was based on it earning a high Piotroski F-score of 7, a strong Altman Z-score of 10, a four-star business predictability rank, and an operation margin that is outperforming over 86.14% of global competitors. USANA’s earnings per share have grown 8.60% per annum over the past five years.

Per Zack’s Equity Research, for USANA’s last reported quarter of 2020 it was expected that it would post earnings of $1.19 per share but in actuality produced earnings of $1.32, delivering a surprise of 10.92% and marking the fourth quarter in a row it has beaten EPS consensus. It has returned about 8.21% since the start of the calendar year compared with an average of 0.12% for companies in the Medical sector.

Over the course of its three decades in business, USANA has consistently grown its revenues while also remaining transparent and building trust for both its customers and backers. Their focus on innovation within nutrition as well as product development makes them poised to do well in an era that has suddenly seen personal health thrown to the forefront.