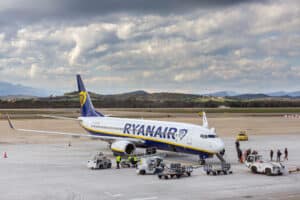 Ryanair expects air passenger numbers to bounce back to near normal levels by next summer, defying industry predictions that it could take years for growth to return after the pandemic.

The airline’s chief executive, Michael O’Leary, said passenger volumes should reach 75-80% of pre-Covid levels in 2021, especially if a vaccine was developed by the spring.

While he admitted winter was a “write-off”, he claimed Ryanair was poised “at the dawn of an extraordinary era of growth” with a fleet of new planes arriving, and was emerging from the pandemic with a strong balance sheet, in a position to offer low fares to stimulate travel.

Speaking at the World Travel Market conference, O’Leary said he was optimistic that Covid vaccines would be rolled out before the peak summer season in 2021.

“There’s going to be an enormous snapback on travel demand … Mrs O’Leary is very keen to go back to the Algarve and I suspect she’d be there in 2.5 nanoseconds after the coronavirus restrictions are lifted. I think she’s reflective of the overwhelming majority of Europe’s population, and they will go back,” O’Leary said.

“We’re going to see a surge of that intra-European tourism next year, and we need to be there to provide the capacity at low prices.”

Ryanair has cut capacity for winter, but not yet as drastically as its rival easyJet. O’Leary added: “I’ve heard a lot of rubbish coming from legacy airlines that it’ll be 2035 till the volumes come back. Rubbish. Volumes will go back in 2021 or 2022 pretty quickly – they will go back because Ryanair will discount prices, hotels will discount.”

The travel industry organisation Abta said some firms had reported bookings for next summer since the announcement of a vaccine by Pfizer on Monday, while more were receiving inquiries from would-be holidaymakers.

TravelSupermarket said 54% more people had searched for holidays in the 24 hours since the vaccine news, compared with the previous Monday. On the Beach, which organises about 1.5m package holidays a year, said online traffic had jumped 25% but there had not yet been a notable impact on bookings.

An Abta spokeswoman said the vaccine news would “go some way to restoring consumer confidence” but the industry needed government support now “as many travel companies will not be able to wait for the full rollout of a vaccine”.

O’Leary criticised government “incompetence”, particularly in the UK but across Europe, in addressing the pandemic. He said: “What was disturbing is the way the government mishandled that first lockdown … it should have given time to put in place mass testing.”

He said Boris Johnson’s promise of a world-class test-and-trace system had been “utter vacuous rubbish”, and questioned the approach now being taken by the UK government’s global taskforce in developing a new testing regime for arrivals. “Airport testing is a complete waste of time … it’s too late, it takes too long, what do you do in a terminal when you have positive tests?”

Ryanair supported pre-departure testing, O’Leary said, to restart flying. “Testing should not be at airports, people should be coming to airports with a negative test … Certainly within Europe, short-haul should be restarting quickly.”

O’Leary said he had been busy negotiating new airport slots around Europe for after the pandemic. “Airports are realising that a lot of Lufthansa’s capacity is not coming back … they want to deal with an airline that is rapid and flexible. What we’ve done is been keeping all our planes, pilots and crew current, so we can pounce on growth.”

Ryanair’s fleet should be augmented by the first deliveries of Boeing 737 Max planes, O’Leary said, anticipating European regulatory approval of the model in January. He dismissed concerns over the safety of the plane, which was grounded after two fatal crashes. “It will be the most audited, the most interrogated, safest aircraft ever to fly.”