MORE FILIPINOS are confident that the government is doing well in tackling corruption compared with Asian neighbors, although they also believe corruption in government remains a big problem, a survey from Transparency International showed. 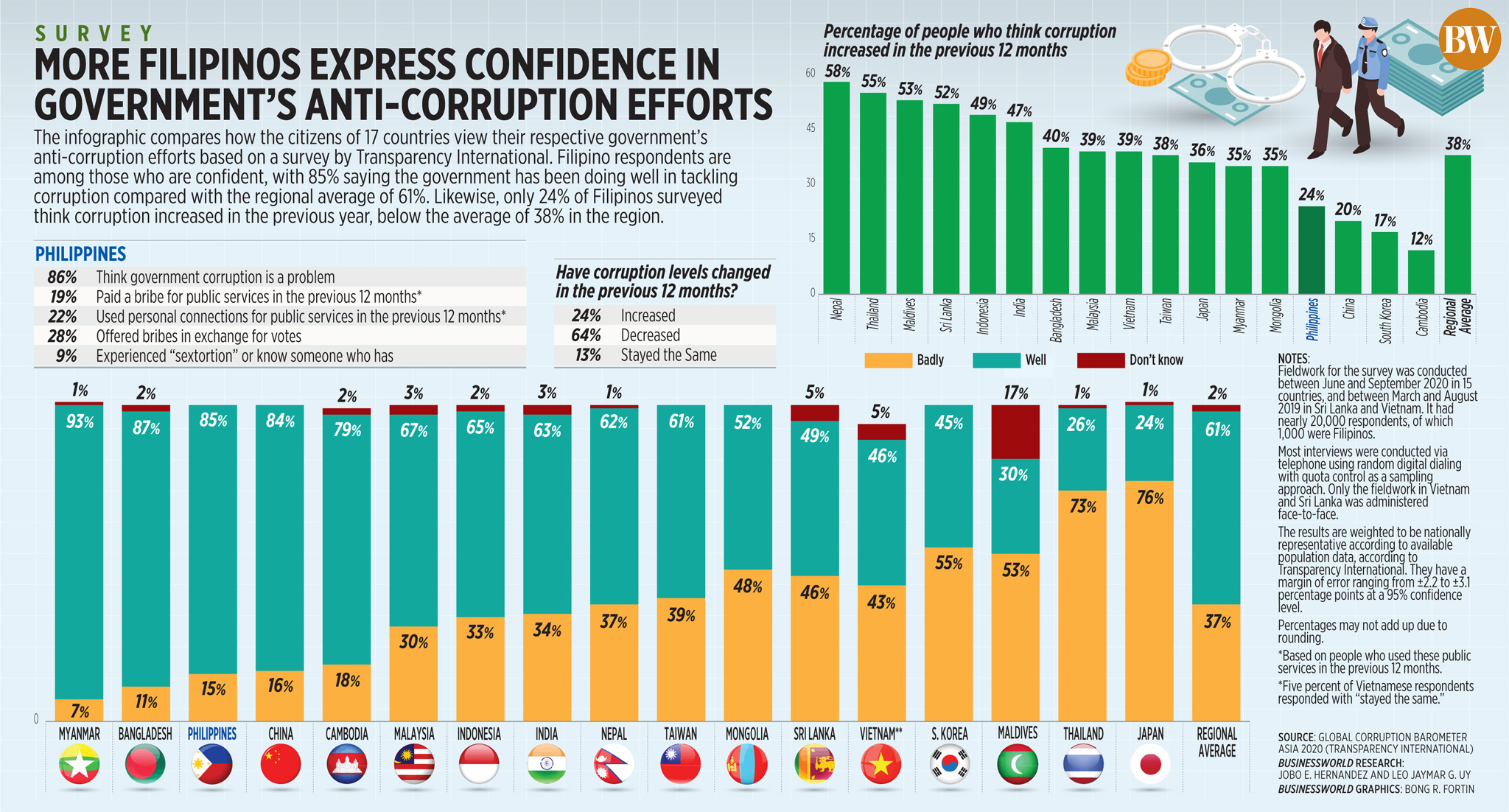 As much as 85% in the Philippines believe that the government is doing a good job in addressing corruption, better than the Asia average of 61% and third highest among the countries surveyed.

Despite this, 86% of Filipinos believe that corruption in government is a big problem, above the regional average of 74%. This was also the sixth highest in the region, after Indonesia, Taiwan, Maldives, India and Thailand.

At the same time, 82% of Philippine respondents believe that their anti-corruption agency is doing well in tackling corruption, the fifth highest in the region after Myanmar, Bangladesh, Nepal and China. This is also better than the 63% regional average approval rating for anti-corruption agencies.

Philippine perception of corruption is divided by institution, with 18% saying that most government officials are corrupt, but only seven percent believe that the president is the same.

More are likely to believe local government, police, and business executives are corrupt, as opposed to bankers and army leaders.

Filipinos are also optimistic about ordinary citizens’ ability to fight against corruption, with 78% agreeing with the statement.

“Only in Myanmar (67%), the Philippines (61%) and Malaysia (53%) do a majority of citizens say that they can report corruption without fear,” Transparency International said.

Vote buying is highest in the Philippines and Thailand, where 28% have been offered a bribe in return for a vote. The regional average is 14%.

“Often one of the root causes of political corruption is election abuse, including fraudulent, undeclared funding of political parties, vote buying or the spread of fake news during campaigns,” the report said.

“Throughout the region, election commissions and anti-corruption agencies need to work in lockstep to counter vote buying, which weakens trust in government,” she said in a statement.

University of Santo Tomas political science professor Marlon M. Villarin in a phone interview said that Filipinos’ confidence in the government’s anti-corruption measures is based on the political side of the administration’s efforts in curbing corruption.

“If you look at the data, most of the references of the Filipinos that define confidence to the present administration’s efforts in fighting corruption — they are very limited only on the news such as the president sacking executive officials out, and these are purely political moves,” Mr. Villarin said.

He said that judicial and administrative aspects should be considered as well, such as the corruption cases that are filed and resolved in the court. Mr. Villarin added that reports on Philippine views on corruption should not just be quantitative surveys but also qualitative analyses that include the assessments of civil society and industry groups.

At the same time, nine percent of Philippine respondents said they have either experienced or know someone who experienced “sextortion,” or the abuse of power for sexual advantage.

Only around 19% of Philippine respondents said they have paid a bribe in the last 12 months, including for basic services like healthcare, education, utilities, and police.

This is lower than China and India, where 28% and 39% respectively said they have paid bribes in the past year. But it is consistent with the regional average of 19%.

Around 22% said they have used personal connections for public services in the last 12 months.