White House Press Secretary Karine Jean-Pierre insisted that President Biden takes classified information seriously on Monday, just days after a fourth batch of documents with classified markings turned up during an FBI search of his home in Wilmington, Delaware.

Fox News White House Correspondent Peter Doocy asked if there is a ‘precedent for people running for president after the FBI searched their sock drawer?’

‘Here’s what the president’s going to focus on. He’s going to focus on continuing to deliver for the American people. That’s his focus. That’s what he focuses on every day,’ Jean-Pierre responded, adding that Biden does intend to run for president again in 2024.

In the latest discovery, the Justice Department said it seized ‘six items consisting of documents with classification markings’ from his Wilmington estate during a 13-hour ‘planned, consensual search’ by the FBI on Friday.

Additional classified documents have also been found in Biden’s garage and personal library in Wilmington, as well as at the Penn Biden Center think tank on Nov. 2, 2022.

Doocy also asked Jean-Pierrre if President Biden is involved in a ‘cover-up.’ 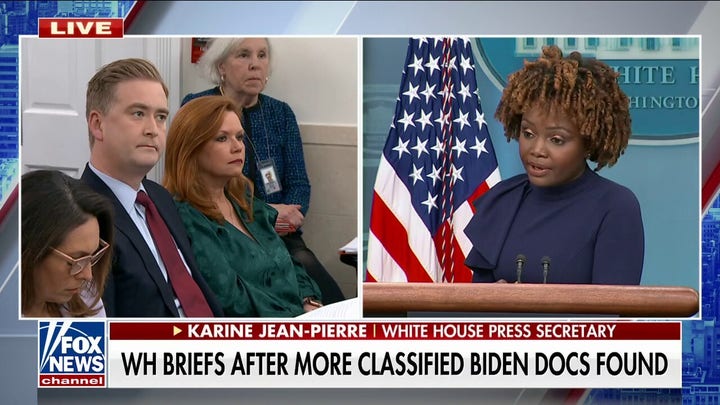 Senate Majority Whip Dick Durbin, D-Ill., told CNN on Sunday that Biden should be ’embarrassed by the situation,’ but that the president has been more transparent than Trump.

‘It is outrageous that either occurred,’ Durbin told the news outlet. ‘But the reaction by the former president and the current president could not be in sharper contrast.’

Sen. Joe Manchin, D-W.Va., told NBC News on Sunday that Biden ‘should have a lot of regrets’ and admit that he was ‘irresponsible.’

Biden said that he doesn’t regret how he’s handled the ordeal while touring storm-damaged areas of California last week.

‘I think you’re going to find there’s nothing there. I have no regrets,’ Biden said. ‘I’m following what the lawyers have told me they want me to do. It’s exactly what we’re doing. There’s no there there.’

Paul Best is a breaking news reporter for Fox News Digital and Fox Business. Story tips and ideas can be sent to Paul.Best@fox.com and on Twitter: @KincaidBest.